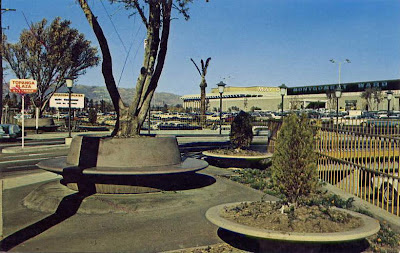 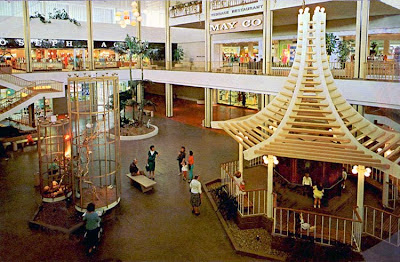 I just wanted to share with you a few pictures of the local mall. This is what Topanga Plaza looked like when I was growing up. Topanga Plaza was the first indoor mall west of the Mississippi. 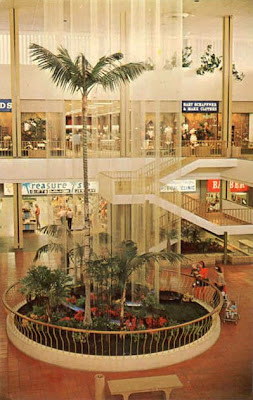 My first real job was working in that May Co. in the section called "MIKES PLACE FOR BOYS." If you take a look thru the birdcages you can see the THRIFTY'S drug store that sold triple-scoop Ice-cream cones for 15 cents. There was also a cool musicstore that actually sold instuments not just records.

These pictures must have been taken in the mid 60's. By the early 70's the mall looked a little run down. The fake plants were taken out of the giant drippy oil lamp/fountain and eventually the lights blew out and were not replaced.The oil stopped dripping and it sat abandoned for a long time before it was removed. I also remember those damn parrots. Their horrible squawks could be heard thru the entire mall. They were unbearable if you happened to be in the same courtyard as these damn things. That odd pagoda thing turned into a store called Chickenshirt. The best place to get iron on decal shirts. I got my Farrah Fawcett shirt there and my Chewy Chewbacca canary yellow shirt.

This mall used to have an ice skating rink next to the Seven Seas food court. 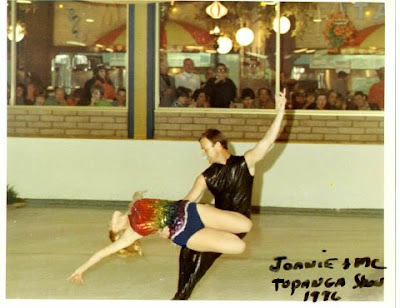 not me
There was also the burger place called "Chuckburger on the Square" A nice place to go if you were ditching school.

The mall opened on Febuary 10th 1964. Only two stores have survived this mall since the opening.
They are:
See's Candies and Lane Bryant.
The fact that its these two stores that survived the test of time tells you volumes about women of the West San Fernando Valley.
Posted by Gavin Elster at 11:04 AM

Pull out more of these retro LA pics if ya got 'em please.

I'll try and look for mine.

Yes, See's and Lane Bryan seem to go hand in hand, or fist to mouth. I didn;t get to know the Topanga Mall until I was in college. I do remember when the Esplinade in Oxnard was the IT PLACE. It got torn down a few years ago and turned into a strip mall with an Off 5th amongst other things.

If you ever take mushrooms and go to this mall and think the mushrooms aren't working, just wait a little bit instead of driving. They just need a little time.

I haven't been in since the last remodel, so I don't know what the exciting new parking structure is like.

remember the oil or goo or something that dripped down a string as decoration? it was at one end of the mall -- i want to say the ice skating rink end, but i'm probably wrong.
ew.

That goo/ oil fountain was by the Broadway at the ice rink food court end.

Luke: I haven't been in that mall since the Broadway was taken out.

We would get stoned and go their to buy our "Hardy Boots."
Other states know them as Beatle boots.
Then Northridge Mall opened...It was totaly space aged. Trippy.