Vertigo - From Among the Dead.

Vertigo was screened at the Hollywood cemetery this evening. It was an interesting screening. The print was not any print I have seen in the past. It appeared to be restored however the audio was the unrestored correct audio. This was not the Harris/Katz version. That "restored" version is the one that Universal has released. I have no idea what I just saw but I can tell you...
I liked it! 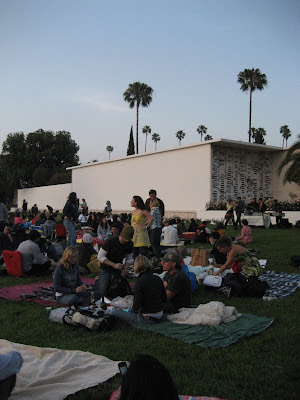 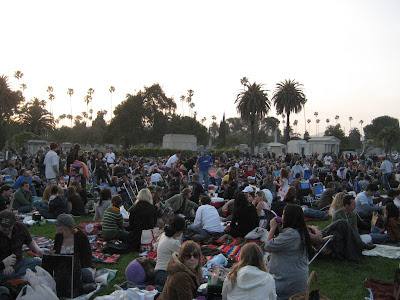 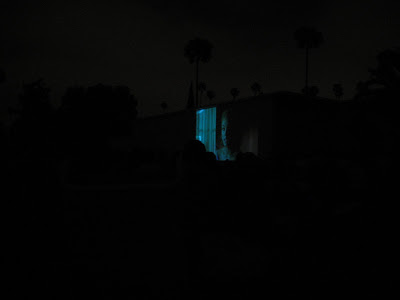 Yes, Dave at Daveland I took the above photo thinking of you.
I have to say that seeing this film in a cemetery is pretty great. This was a pretty big turnout and a nice respectful crowd.

The problem with the official "restored" cut is the foley. The foley has been replaced. This changes the feel of the film. You can clearly hear the replaced foley during the opening rooftop scene. The gunshots are from current semi automatic guns and not revolvers. The Spanish tile roof they jump onto takes on a shake tile sound in the restored cut. This screening offered up the original audio. It was a wonderful surprise. The film started with the Paramount logo and not the Universal logo, an indication this was a special screening even jaded film buffs could enjoy. This was the perfect place to see this film. The graveyard next door to the studio that made the film. I guess the only other place that could top this location would be a screening at Fort Point .
Thanks Luke, Michael and Ricky for a wonderful evening.
Posted by Gavin Elster at 1:03 AM

that must have been super! I love everything hitchcock! yes sir!

...and thank YOU for the awesome pick-a-nick basket! It was a lots of fun- but next time, we're taking the back gate out.

Hey, that's not fair that you guys down south got to see that print -- this is our movie. Actually screening it on the back exterior wall of the Legion of Honor Museum might be a good spot too, especially since the jumping in the water scene wasn't really shot at Fort Point. Ah, well, thanks for the share. It must have been fun.

Every time I go I'm hoping that the city has built stairs that lead down to the bay.

...and that they will build the bell tower on the mission at San Juan Bautista.

And the house at the corner of Eddie and Gough would magicly reappear and become a real hotel.

Second the motion on the pic-a-nic basket, Mr. Ranger. Thanks! I'll have to go more prepared for H&M. :-) I was too busy taking pictures of potential Juke Joint Snipers, is all.