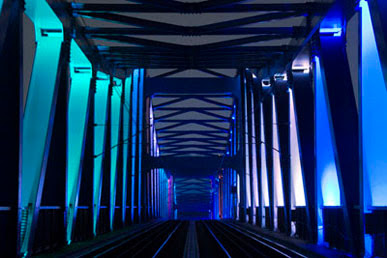 Nocturne is an ever changing colour light-work conceived for the QEII Metro Bridge. It takes its inspiration from the River Tyne and the communities of Newcastle and Gateshead. By linking the tidal movements with the train journeys Nocturne seeks to reflect the connections between the cities and the vein of water that divides them. Because of the way they have programmed the lights every night will be different.

The light effects that Nocturne shows are determined by the colours displayed in digital photographs that have been sent. This means that anyone can change the way the bridge looks and feels by sending a photograph, or a scan of an image, in fact, anything that can be sent as a jpeg will control the appearance of the bridge.

I submitted several photos and all of them will be used during this installation. Check out the Image Catalogue to view the images. My photos will affect the bridge on January 26th 2008 and then for several days from January 28th thru January 31st 2008.
Posted by Gavin Elster at 10:01 PM

Isn't that a cool idea! I always learn something new at your blog!!