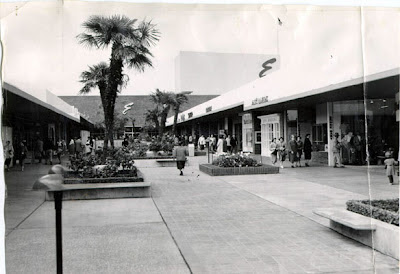 The Fallbrook mall was an outdoor mall when I was growing up. In 1978/79 the Fallbrook malls very own WOOLWORTHS was the best place to get Star Wars Action figures. The reason was most people didnt shop at Woolworths anymore and the toy section was untouched. I remember they had a cool model kit section. They had models from 2001 the Kubrick film. They had tons of those round moon lander pods. They also had a cool soda fountain where you could get a grilled cheese and a giant chocolate shake. Woolworths also had those crappy joke/magic stands. You know... the ones that have snapping gum or superhot candy to "fool you friends." I dug that crap when I was a kid. You could never have enough lil' smoking dogs that smoke little tiny cigarettes.
Posted by Gavin Elster at 2:35 PM

You know what I think of when I see this? "I need new pants because my husband urinates."

Fallbrook Mall! Home of Karl's Toys! The Fox Theatre! JcPenney AND Sears (where I bought my first non-kid LP, by the way)!

Then they got the bright idea to make it an indoor mall, which worked really well- or so poorly that for years they had at least three "dollar stores."

Where did you find this?

I found the picture from a google search of Fallbrook Mall but I cannot locate it on the page found:
http://aprilbaby.typepad.com/a_california_life/san_fernando_valley/index.html

A rather interesting page. This woman grew up at the same time as we did but started out in San Fransico.
Shes got some great pictures of local west valley spots and she mentions she used to go to scream (at the Berwin)

2 strongest memories of fallbrook square.
1. skateboarding.
2. buying 45s at sears.
2+. buying a 45 of the bay city rollers "saturday night" at sears and dropping it before i got home and the edge chipped so that whenever i played the song i had to place the needle (i'm so old) and the song began something like this:
"T-U-R-D-A-Y Night!"

The concept of outdoor malls has sort of bit the dust, hasn't it. Even in southern California. There's a great site called Deadmalls.com on those malls of yore.

Junk Thief,
Thanks for the link. What a great site!
It does seem the outdoor mall has gone the way of the five and dime however megahyperconglomomalls like 3rd Street Promanade in Santa Monica, The olde Burbank mall on San Fernando and even CityWalk at Universal seem to keep the Outdoor mall concept on life support. Why even the old Firestone tire plant in the City of Industry was converted to an outdoor outlet mall.
They are still out there but they should be put on the endangered shopping list.

Kathrine,
The first thing that comes to mind when I think of Fallbrook is getting banned from Sears because I shoplifted a hoodie. I wasn't allowed back until I was 18 or with my parents.
The second was flying COX airplanes in the back parking lot behind sears. (remember those damn gas powered planes on a string?)

Scotties Doughnuts on Victory blvd across from sears. The best video games!

Actually, I find the opposite to be true now: the INDOOR mall is biting the dust. they're going to tear down Santa Monica Place to extend the outdoor 3rd Street Prominade and connect it with the Civic Center and Main Street. The Grove at 3rd and Fairfax is another prime example. Plus the prototypes of The Grove: The Commons in Calabasas, and the one in Westlake Village.
In Padasena, Old town Colorado is THE place, and they tore down the indoor mall and connected Macy's to the semi-outdoor center there with PF CHangs and the Pacific Movie Theater.
And then they're building that new complex in Glendale next to the Galaria- isn't that supposed to be an outdoor/Grove-like place too?

oh yeah thats right. Caruso the shifty contractor and owner of the grove is building an outdoor mall in glendale. Caruso, the guy who can delay reporting deaths in order for malls to operate smoothly.

That photo is not of Fallbrook Square. The big "E" is the symbol for the Emporium, which was a San Francisco chain that never reached into Southern California

I believe there was a merry go round in the middle too. Funny how things come full circle. Outdoor mall to indoor and now the trend is outdoor again.

True, this is NOT Fallbrook Mall.. this picture is right out of a Flickers set about Stonewood Mall in San Francisco in the mid-late 50's.. Meanwhile Fallbrook Mall was built in 1963. Look at the dress lengths, for starters.
http://www.flickr.com/photos/mindcage2000/2738451427/

Hi, I followed my blog (Aprilbaby's California Life) searches back to this site. That photo is actually from a San Francisco shopping center called Stonestown. It's now an indoor mall.

Thanks for your nice comments about my blog!