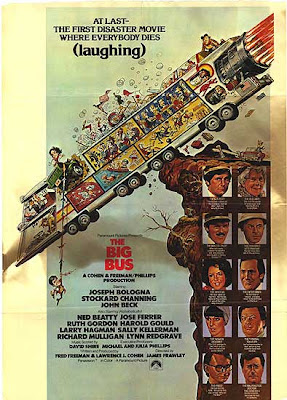 The Big Bus is a 1976 James Frawley comedy starring Stockard Channing as Kitty Baxter and Joe Bologna as controversial driver ("Eat one lousy foot and they call you a cannibal") Dan Torrance. A spoof of most disaster movies up until that time, it follows the maiden cross-country trip of a nuclear powered bus named Cyclops that's equipped with a bowling alley, swimming pool and piano bar. A bomb planted by a saboteur damages the bus' reactor, preventing the bus from stopping.
A high point is when they try to balance the bus, which is teetering on the brink of cliff, by flooding the galley with soft drinks from the fountain. Of course Stockard/Kitty is in there about to drown in soda pop, and Joe/Dan has to rescue her. "All those years, why did you have to bed all those other girls?", she asks him. "I bedded them so I could think of you,", he says, "but from now on I'm only going to bed you, and think of them." "You're a strange one, Dan.", she replies. 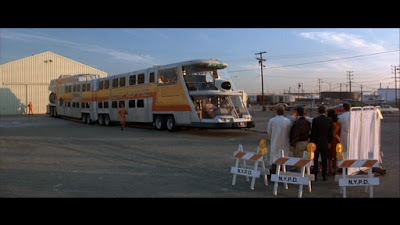 Actor John Beck plays the co-driver "Shoulders" O'Brien, a nickname he acquired because he has narcolepsy and often falls asleep and drives on the shoulders of the road. Coincidentally, he also happened to have big shoulders.
A big-budget film notorious for its mostly lethal reviews and disastrous performance at the box office.
Posted by Gavin Elster at 12:30 PM

I had such a crush on John Beck. I didn't understand why I was so attracted to him....I loved him in this movie as well as in "The Other Side of Midnight". And then it dawned on me. I am gay. REALLY gay.

I remember seeing this much later on NBC. I think the kid that played "boxey" on the old battlestar was on it, too.

I've only seen parts of this, and it's a good/bad or bad/good flick. The things Stockard Channing had to do to pay the bills. What's the horrible one she also did with Warren Beatty?

That would be "The Fortune" directed by Mike Nichols.
A 1920's anachronistic nightmare.

I remember seeing this when it came out and thought it was HILARIOUS! Then again, I was 9 at the time...

I remember seeing the Bicentenial parade on Wilshire Blvd. This bus was in the parade. They threw little toy mock ups of the bus out to the crowd. I caught one but some big jerk of a man snatched it from my hands.

Don't forget... Harold and Maude at the hollywood cemetary one week from saturday.

or is it two weeks I forget