Something you don't see in the park everyday.

According to the castmembers we spoke with today a dancer collapsed backstage and was placed onto a gurney and wheeled thru the park. You'd think if it was backstage they could keep her backstage out of sight from the guests but... no.
So children got to see that the park can be dangerous or a place that bad things can happen.
The castmember speculated that it may be because dancers are allowed to bring their own food into the park and that the sandwiches may have sat out too long.
Gotta love the castmembers!

The official released story is as follows:

Authorities were called to the park about 11:45 a.m. after the group, consisting of about a dozen girls from Woodland, Calif., complained of being overheated, Anaheim Fire Department spokeswoman Maria Sabol said.

The teens were wearing costumes with at least three layers, which might have contributed to dehydration, she said.

The girls were taken to Western Medical Center-Anaheim and were expected to be released by Sunday night, Sabol said.

I snapped some pictures as it happened. 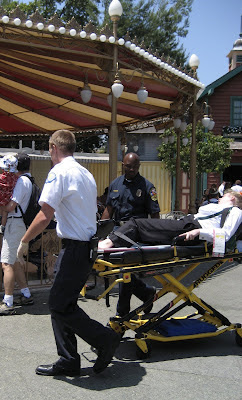 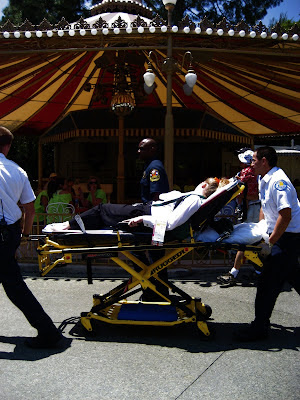 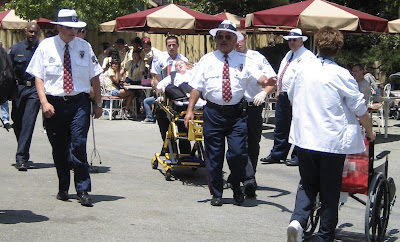 \
We were also greeted with the old hand to the video camera "this area is off limits" AFTER the woman was hauled away.

Now if you are in the mood for something you DO see everyday at the park be sure to check out THE MAJESTIC BUTTERHORN for some very special pictures.
Posted by Gavin Elster at 3:52 PM

We were there yesterday too! I was too busy being a mom to see all the good stuff... Thanks for capturing the moment.

We're going back next Sunday if you want to hook up.

Give me a call later in the week. And remind me to bring hand sanitizer this time. That place is full of cooties!