He does because he cares 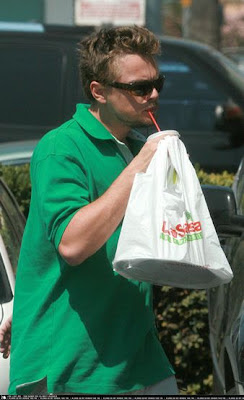 CANNES, France - About a decade ago, when Leonardo DiCaprio was on the cusp of megastardom and Al Gore was the U.S. vice president, the two thought about global warming at the same time. Perhaps Al looked up at the stars and Leo glancing from the balcony of his “friends” Los Feliz apartment saw a star that looked a lot like the one Al was looking at…
in another part of the world…
2 hours earlier.
Now an all-out environmental activist, DiCaprio has followed Gore's lead by bringing a climate change documentary to the Cannes Film Festival. DiCaprio co-produced and co-wrote "The 11th Hour," which explains how humans have changed the climate and how to fix the damage. Its Dicaprio’s Battle Beyond the Stars to Gore’s Star Wars.

Wearing what appeared to be pink dyed polar bear feet as slippers a childs plastic Superman Returns cape and baby harp seal Speedos the “actor” recorded a memo into a micro cassette recorder and handed it to his teen-version-of-himself assistant to give to the press who were standing less than five feet away. "It's such an amazingly large issue, and you suddenly you feel like, what can I do? What can I do? It's too big for me to deal with," the 32-year-old actor told reporters Saturday as he sipped rum out of a multi-umbrella’d pineapple in a beach cabana overlooking the Mediterranean.

DiCaprio said the environmental movement owed a great debt to Gore, whose "An Inconvenient Truth," was shown at Cannes and won an Academy Award for best documentary feature. Dicaprio also added that he has not been in actual contact with any members of this movement but, as he puts it “knows how they feel.”

"I think that movie, through the cinematic format, was able to convey science to the public and to the media in a way that it had never done before. Oh and also a venti half caf frappachino conveys yummy to my tummy even more yummy than air or water alone.” DiCaprio said.

He vaguely recalls their “meeting” about 10 years ago, Gore "took his time to talk to me about the issue of global warming, which I didn't really understand very much about, I was kinda high and its taken this long for the information to sink in. In fact I thought I was ordering drive thru that’s how wasted I was. I was pissed that the end of the conversation I didn’t have my two .99 tacos. From then on I've kind of been more active."

While "An Inconvenient Truth" laid out the science behind global warming and its impact, DiCaprio's film doesn't try to prove that global warming exists — it accepts that it does and goes from there. It asks and responds to philosophical questions such as, how did mankind let nature deteriorate to this point?

DiCaprio, as Sprigdiggle the magical Earth-elf narrates the movie. The film was directed by Leila Conners Petersen and Nadia Conners and includes commentary by visionaries from physicist Stephen Hawking to former Soviet President Mikhail Gorbachev.

For a new project, DiCaprio is looking for a script with an environmental and dance theme. Possibly with puppets.

He betta recyle that plastic bag and cup and straw and packaging material for his LA SALSA meal.