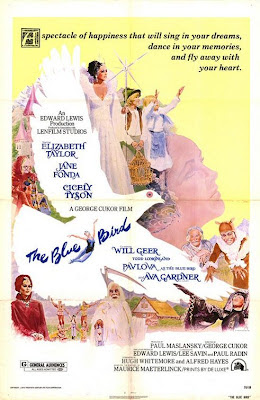 The first official co-production between the United States and the Soviet Union, The Blue Bird was the third screen adaptation of the children''s story by Maurice Maeterlinck about a pair of children, Tyltyl (Todd Lookinland) and Mytyl (Patsy Kensit), who leave home to search for the Blue Bird of Happiness. After spending some time wandering through a fantasy world and encountering The Night (Jane Fonda), The Cat (Cicely Tyson), Luxury (Ava Gardner), Father Time (Robert Morley), and The Oak (Harry Andrews), they meet The Queen of Light (Elizabeth Taylor) and discover that true happiness can be found right at home, with your family. As the box-office failure of the first two versions of this story proves, putting this sort of children''s fantasy on film is tricky business, and despite a top-notch cast of American and Soviet talent and the directorial expertise of veteran filmmaker George Cukor, The Blue Bird had a notoriously difficult production, with the American and Russian crews not always understanding each other''s working methods, the Soviet camera crew not knowing how to light African-American actress Cicely Tyson, and Jane Fonda often trying to engage the Russian crew members in political discussions.
Posted by Gavin Elster at 5:44 PM

This is one of a few very odd musicals that still managed to get made in thh 1970s. Two others worth seeking out for sheer weirdness are "A Matter of Time" and "Lost Horizon." I've never seen the former but the latter is really entertaining in a very disturbing way. Rich white people go to a paradise where Asian do all the dirty work. The white people never age. The very fact that anyone would think of casting Liv Ullman in a role that seems to have Julie Andrews spelled all over it is fascinating. I actually have the soundtrack to enjoy in all its horror.

that movie is even too gay for me

Thats pretty fuckin' gay!
I'm currently looking for a copy of this film. It has seriously dissapeared. Its not on tape or DVD anywhere. I know its got to be crap but I have to see it. The fact I cant find it anywhere makes me want to see it even more. Please think of this post as a milk carton. HAVE YOU SEEN THIS FILM?

Lost horizon ? Whuuuh?
Frank Capra's film based on the James Hilton novel? The 1938 version won best picture. Plane-crash survivors are led through the Himalayas to Shangri-La, a village without hate or crime where no one ages. Robert Conway (Ronald Coleman) is chosen to succeed Shangri-La's High Lama and falls for Sondra (Jane Wyatt), but his brother convinces him to leave on an ill-fated trek. When Conway ends up in England with amnesia, will he manage to go back and fulfill his destiny?

What a great idea for a musical? Bizzare. I cant wait to see it. I've been searching but it does not look like its been released. In fact it looks like the soundtrack is all that exists today.
I went to school with Lynn Ullmann, Liv's daughter. Nice girl who seemed to be attracted to gay men. Shes now an author and married with kids. I'm still not.