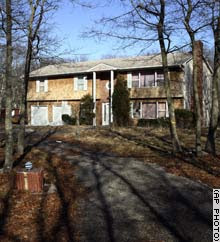 Police were called to a Long Island man's house last week. The cops discovered the mummified remains of the resident, dead for more than a year, sitting in front of a blaring television set.

The 70-year-old Hampton Bays, New York, resident, identified as Vincenzo Ricardo, appeared to have died of natural causes. Police said on Saturday his body was discovered on Thursday when they went to the house to investigate a report of a burst water pipe.

"You could see his face. He still had hair on his head," Newsday quoted morgue assistant Jeff Bacchus as saying. The home's low humidity had preserved the body.

Officials could not explain why the electricity had not been turned off, considering Ricardo had not been heard from since December 2005.

Neighbors said when they had not seen Ricardo, who was diabetic and had been blind for years, they assumed he was in the hospital or a long-term care facility.
Posted by Gavin Elster at 1:41 PM