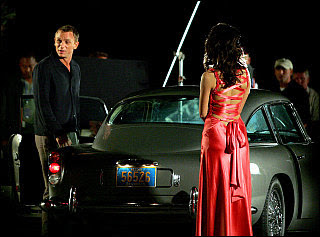 I was all ready to accept CASINO ROYALE as a real Bond film. So, SO ready. Now keep in mind I'm determined to find flaws in this film that don't normally distroy an everyday film but in a BOND film little things are deal breakers.

My new major flaw in this film.
Sloppy writing.
Now this is coming from a man who can't use punctuation correctly nor will there ever be a script coming from his computer.

Here is the new deal-breaker for me:

As Bond plays his first game of poker the ownership of the Aston Martin DB5 is on the table. The keys are actually on the table on a pile of chips. When Bond wins he takes the keys and also asks the loser for the VALET ticket.
He has the keys in his hand and the valet ticket.
How in the hell is he in possesion of the keys and the valet ticket? Did the valet park it with his mind? Do they airlift the cars to the parking spaces?
Posted by Gavin Elster at 8:38 PM

The only exception to guaranteed quality I've found so far, unfortunately, is Turkish James Bond.

Wow that is an exception. I guess the Bond well is dry.