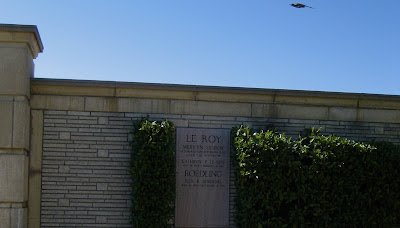 The final resting place of Mervyn Le Roy.
Leroy produced (and partly directed without credit) MGM studio's classic The Wizard of Oz (1939), although it was not a classic at the box office; its poor reception convinced Leroy to quit producing pictures and go back to directing them. He had always had a good relationship with actors, and had discovered a number of people who would go on to become major stars, such as Clark Gable (who was rejected for a role in Little Caesar by Jack L. Warner over his objections), Loretta Young, Robert Mitchum and Lana Turner.

KATHRYN P. LeROY was his wife. His final wife.

As for Rita I don't know much on her aside from the following:
RITA R. ROEDLING whose social security number was 352-22-6323 and whose address was 1015 No. Beverly Drive, Beverly Hills, California-90210.
Attended the Latin School of Chicago and graduated in 1946.
I dont know who she is. Was she a daughter?
Posted by Gavin Elster at 9:31 PM