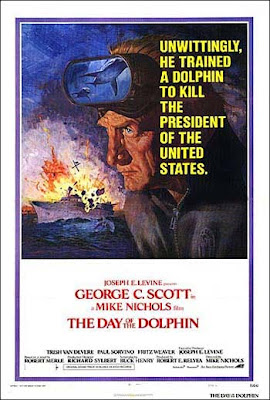 Dozens of dolphins and sea lions trained to detect and apprehend waterborne attackers could be sent to patrol a military base in Washington state, the Navy said Monday. In a notice published in this week's Federal Register, the Navy said it needs to bolster security at Naval Base Kitsap-Bangor, on the Puget Sound close to Seattle.
The base is home to submarines, ships and laboratories and is potentially vulnerable to attack by terrorist swimmers and scuba divers, the notice states.
Several options are under consideration, but the preferred plan would be to send as many as 30 California sea lions and Atlantic Bottlenose dolphins from the Navy's Marine Mammal Program, based in San Diego.
"These animals have the capabilities for what needs to be done for this particular mission," said Tom LaPuzza, a spokesman for the Marine Mammal Program.
LaPuzza said that because of their astonishing sonar abilities, dolphins are excellent at patrolling for swimmers and divers. When a Navy dolphin detects a person in the water, it drops a beacon. This tells a human interception team where to find the suspicious swimmer.
Dolphins also are trained to detect underwater mines; they were sent to do this in the Iraqi harbor of Umm Qasr in 2003. The last time the animals were used operationally in San Diego was in 1996, when they patrolled the bay during the Republican National Convention.
Sea lions can carry in their mouths special cuffs attached to long ropes. If the animal finds a rogue swimmer, it can clamp the cuff around the person's leg. The individual can then be reeled in for questioning.
The Navy is seeking public comment for an environmental impact statement on the proposal.
The Navy wanted to deploy marine animals to the Northwest in 1989, LaPuzza said, but a federal judge sided with animal-rights activists concerned about the effects of cooler water, as well as how the creatures would affect the environment. Water in the Puget Sound is about 10 degrees cooler than in San Diego Harbor, which has an average temperature of about 58 degrees, LaPuzza said.
Since then, the Navy has taken the dolphins and sea lions to cold-water places like Alaska and Scandinavia to see how they cope.
"They did very well," LaPuzza said. If the animals are sent to Washington, the dolphins would be housed in heated enclosures and would patrol the bay only for periods of about two hours.
Stephanie Boyles, a marine biologist and spokeswoman for People for the Ethical Treatment of Animals, said that sea mammals do not provide a reliable defense system, and that they should not be kept in small enclosures.
"We believe the United States' citizens deserve the very best defense possible, and this just isn't it," Boyles said, adding that dolphins are easily distracted once in open water. "They don't understand the consequences of what will happen if they don't carry out the mission."
Dolphins can live as long as 30 years. LaPuzza said the Navy occasionally gives its retired animals to marine parks but generally keeps them until they die of old age.
The Navy has been training marine mammals since the 1960s and keeps about 100 dolphins and sea lions. Most are in San Diego, but about 20 are deployed at Naval Submarine Base Kings Bay, Ga.
The Navy hopes eventually to downsize its marine mammal program and replace the animals with machines.
"But the technology just isn't there yet," LaPuzza said. "The value of the marine mammals is we've been doing this for 35 years, and we've ironed out all the kinks."
Posted by Gavin Elster at 11:03 AM