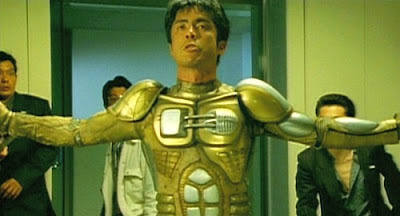 To wind down from the rage I felt from watching this years Oscars I decided to watch FULL METAL YAKUZA.
One of the lesser known Takashi Miike films, Full Metal Yakuza tells a story of Kensuke, a janitor/cleaning man for yakuza gang. His boss, Tousa is about to go to prison for a few years. Kensuke and Tousa die in assassination shortly after imprisoning. Still. their life isn't about to end since crazy scientist builds a modern day version of Frankenstein's monster and Robocop - using robotics and parts of human bodies. The head of Kensuke is attached to the body.

Full Metal Yakuza has clear influences from Paul Verhoeven's Robocop in its idea, plot and individual scenes. Most surprising, though, was to notice that its humor is close to Troma Teams movies - Miike succees to exceed every lines of bad taste, in a way that even Lloyd Kaufman cannot compete. Robogangster has different "features", like enormous penis wobbling around and between his legs. And that hilarious, sideways-moving defence "dance" that has to be seen. This kind of movie wouldn't be anything without huge blood spurts and dismemberings. After the "light" comical approach there's a disturbing scene that includes necrophilism, that won't (hopefully) make you laugh. This film is so all over the place that it was a nice change of pace from all the self sucking that is the Academy Awards.

I suggest you see this film and get a taste of what non-western direct to video ,v-cinema has to offer.
Posted by Gavin Elster at 10:55 PM