I didn't request this. 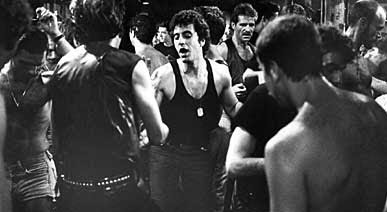 "It split the gay community," director Billy Friedkin recalls his 1980 Al Pacino starrer, "Cruising. " It's coming out as a DVD from Warner Home Video this Fall with a premiere in Cannes. Friedkin has remastered it digitally as well as upgraded the sound. But there are no changes in the film itself, he says.

Daily Variety's review by James Harwood noted, "If this is an R, then the only X left is actual hardcore." Friedkin explains, "I was making a statement between the leather-vise world and those in the then-discreet gay community, which had not come out of the closet."

In "Cruising, " Al Pacino plays the young cop sent underground by police chief Paul Sorvino to search for a sadistic killer. Jerry Weintraub produced the film, and it is currently being DVD-augmented with behind-the-scenes background info by Laurent Bouzereau who has edited 150 DVDs, including Spielberg's "War of the Worlds" and "Jaws. "

Friedkin says he was "amazed" to learn that "Cruising" was the most-requested DVD reissue. (Me too. The movie is awful.)
"It ... took me 50 days of editing to get an R rating for 'The Exorcist'. " Yes, the "Cruising" DVD rating will be R.

Meanwhile, Friedkin's "Bug," which won an award in Cannes last year, will get its release in 120 screens in France, Feb. 21, and in the U.S. in May. He made "Bug" for $4 million in Louisiana. Evidence of Friedkin's artistic versatility is news that his direction of the opera "Salome" has won placement in the permanent repertoire of the Bavarian State Opera following its successful Munich bow by Friedkin.
Posted by Gavin Elster at 4:34 PM

Labels: what the hell?

that movie really impacted me in the 80's when I was just a gay virgin thrown into the fag jungle of life. where did i put my hankee? what color are you?

mustard yellow on the left side.

I remember this film coming out around the time I was going to THE ODYSSEY on Bevery Blvd. Its THE BOOT BARN now.

Not to rub it in, but I was but a mere in-the-closet naive child still.

with that crazy bubble haircut!