All This And World War II 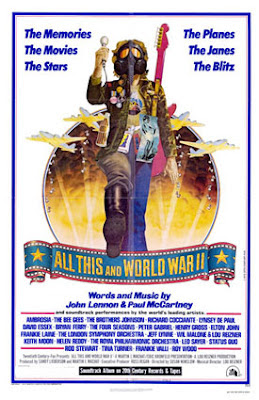 ALL THIS AND WORLD WAR II
combines a pastiche of World War II-themed film segments (both period films and post-war action films) with the backdrop of the music of the Beatles (NOT the original songs, but cover versions by various artists). I think Paul pointed out (maybe in ANTHOLOGY) that he was proud that the enduring thing about the Beatles was that the majority of their songs were about LOVE.
So it probably wasn't the best concept to team the music of the world's best known "love songs" pop group with war footage. However, with that said, there are a few surreal moments in the film, such as marching Nazi's & Hitler rallies set to "Magical Mystery Tour". Perhaps a little subtle humor? "Roll up for the mystery tour" - war - get it? Neville Chamberlain is shown at the precise time that the lyrics "living is easy with eyes close" is sung from "Strawberry Fields Forever". Hitler is shown during "Fool on the Hill" and Mussolini during "Nowhere Man". Both the Nazi blitzkrieg invasions and Dunkirk are shown during "Long & Winding Road" (telling how long the war will be). It is bizarre to see the bombing of London with "Golden Slumbers" playing and downright bizarre to see Japanese troops marching to "Come Together".

The film seems to try and present a chronological portrayal of important events of World War II as "Help" is played over scenes of Rommel in North Africa; a segment from Casablanca where Bogie says, "I bet they're asleep all over America…" (talking about initial American isolationism?); TORA TORA TORA clips mixed with "Sun King" and "I Am the Walrus"; the WACS are mobilizing and shipping out during "She's Leaving Home"; the apathy of those at home to the Japanese "relocation" in America is played to "Let It Be"; there are cartoons showing mobilization of the U.S. to "Getting Better". "Get Back" is the soundtrack to the Nazi's marching 'backwards' (the tide of the war is changing) and even shows Hitler 'dancing'. Another effective image is that of the crew of a ship listening to Keith Moon's version of "When I'm 64" over the loud speakers. The 'theme' continues as the D-Day invasion has a backing of "A Day in the Life"; "You Never Give Me Your Money" and its line "one sweet dream" represents the Allied victory; finally, the can almost guess what will happen during "The End"…that's right, the atomic bomb.

As the credits roll, a reggae version of "Give Peace A Chance" plays over the credits -this is the one song that is not on the soundtrack. This is possibly a 'clue' to an inside message of the film. Showing the atrocities and meaningless destruction of war while subliminally applying the "love" message of the Beatles and ending with "Give Peace A Chance". That is probably also why the film got slammed mercilessly - people just couldn't see beyond the seemingly blatant "bad taste" of mixing World War II with the Beatles to see that the film is indeed a message of peace.

Ultimately, the film is almost like a '70s version of the Beatles own MAGICAL MYSTERY TOUR movie - both movies leave you wondering, "What the hell is the meaning?" Ironically, I think the worst thing that happened to this film was its release by 20th Century Fox. Had it been an 'independent film', it probably would have been considered a surrealistic, dark comedy "art film".
Posted by Gavin Elster at 1:41 AM

I've got the soundtrack, and it was worth the 99 cents I paid for it just to get Peter Gabriel's version of "Strawberry Fields Forever," where he sounds like he's channeling Kermit the Frog.

Its was cut out bin favorite in the 80's . I remember seeing it in the soundtrack section like, forever, at Moby Disc. I never picked one up and now wish I should have.

The Bee Gees three tracks are so overproduced and odd. Its almost like the music and vocals are out of sync.