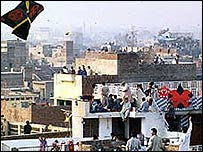 14 people, including a child, were killed and 200 injured during an annual kite flying festival in central Pakistan.
A seven-year-old boy died when an illegal kite string coated in broken glass slashed his throat during the Basant festival near Lahore, local police officer Ahmed Hasan said.
Stray bullets fired in the air killed four people, six kite flyers fell to their deaths from rooftops and a young man died in a brawl, Hasan added.
Another two men were electrocuted after the metal rods they were using to catch stray kites caught on power lines, officials in Lahore added.
Most of the wounded had head injuries caused by falling from rooftops, the officials said.
Lahore police chief Malik Iqbal said nearly 600 people were arrested for firing guns in the air or using banned kite strings.
Thousands of revellers traditionally take part in "kite battles" to mark Basant, which heralds the start of spring in central Punjab province, while socialites hold wild parties in major cities.
But the yearly death toll prompted the Pakistan Supreme Court to ban the festival in 2006, while radical parties say the celebrations -- especially the kite-flying -- are un-Islamic.

"We have held countrywide rallies to condemn the practice of kite-flying and the loss of innocent lives because of it," said Shahid Shamsi, a spokesman for the Muttahida-Majlis-e-Amal, Pakistan's main alliance of Islamic parties.

Rallies were held in the capital Islamabad, Lahore and all major urban centers in Punjab, he said.

Punjab Chief Minister, Ch. Pervaiz Elahi has said that there is a complete ban on kite-flying in the province and strict implementation of this restriction would be ensured. He directed Police and administration to take stern action against the violators.

It may be mentioned that district governments of Kasur, Rawalpindi and Faisalabad had sought permission for kite-flying but the Chief Minister did not accede to their request. Meanwhile, the Chief Minister has directed Local Government Department not to allow kite-flying to any district government and turn down all requests in this regard. He further ordered stern action against any one guilty of violation of the ban irrespective of his influence.

Coming up ...
Bombpop confusion results in the death of local ice cream truck owner and father of three. But first ...
More on Bush. (Pronounced Moron Bush) After these messages.
YOUR WATCHING FOX
Posted by Gavin Elster at 2:58 PM