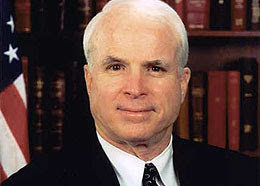 Q: “So no contraception, no counseling on contraception. Just abstinence. Do you think contraceptives help stop the spread of HIV?”
Mr. McCain: (Long pause) “You’ve stumped me.”

Q: “I mean, I think you’d probably agree it probably does help stop it?”

Q: “But you would agree that condoms do stop the spread of sexually transmitted diseases. Would you say: ‘No, we’re not going to distribute them,’ knowing that?”

Mr. McCain: (Twelve-second pause) “Get me Coburn’s thing, ask Weaver to get me Coburn’s paper that he just gave me in the last couple of days. I’ve never gotten into these issues before.”

As of early 2006, AIDS has killed over 25 million people worldwide, according to the World Health Organization.
John McCain doesn not know if condoms help prevent the spread of HIV or AIDS. Try asking any 10 year old Mr McCain.

Ya know... Way back when I dated a girl who didn't know what a moth was. I had to explain to her it was an "UGLY BUTTERFLY." John McCain reminds me of that girl.

**click on the title of this post to read the full article
Posted by Gavin Elster at 11:38 AM

He knows- he's just afraid to say anything that might sound pro-birth control for fear of offending his voting base.

he is a douche.

He's a dumb douche too.

The higher up in government you get, the more douche-like you become.