Zulu Hut
Sometimes called Zululand, this open-air stand with an African jungle theme advertised as "half-mile beyond Universal City on Ventura Boulevard." Proprietor Raymond McKee dubbed himself the Zulu Chief and waiters in blackface served squab and fried chicken under rustling palms. Open until 2 a.m., the Zulu Hut was something of a roadhouse sensation in the 1920s.

Chris' & Pitts
The last Valley restaurant in the SoCal barbecue chain, at 13237 Victory Boulevard in Van Nuys, closed in 2003 and was torn down for another Walgreen's drugstore. The neon sign was saved in the collection of the Museum of Neon Art in downtown Los Angeles. 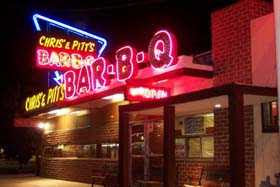 Monkey Island
This unusual amusement was located at 3300 Cahuenga Boulevard, on the Valley side of Cahuenga Pass—the Times usually described it as on Ventura Boulevard. Operated by Adolph Weiss, Monkey Island opened December 9, 1938. A large herd of monkeys, numbering in the hundreds, roamed over an "island" about 150 feet long, with a 40-foot plastic mountain, surrounded by moats and covered with netting. There were palm trees, swings and billy oats for the monkeys to amuse themselves, and waterfalls where they could keep cool. Visitors paid to come in and watch the monkeys and feed them peanuts and vegetables. When the moats were drained in August, 1940, about 100 monkeys fled. Weiss calmly told police "they'll be back," and most apparently did return at feeding time. Escapes were common. Filmaker Warren Miller recalls monkey island:
"I had come to visit a new tourist attraction that was built right near the first Valley stop on The Pacific Electric Railroad, the route of the Big Red Cars. Some investor had built a 40-foot-high, fake plaster and cement mountain and surrounded it with a 20-foot-wide moat of slimy, green, stagnant water. The attraction was 100 undernourished, morose monkeys sitting on the concrete mountain watching you watching them. For 10 cents, you could watch the monkeys. For another five cents, you could buy a bag of peanuts and throw them to the monkeys."
When Monkey Island closed is unknown. It is now a city park.

Cinnamon Cinder
The alcohol-free dance club for teenagers opened in 1962 at 11345 Ventura Blvd. in Studio City. Owned by KRLA disc jockey Bob Eubanks, the club spawned a TV show, a national chain of teen clubs and a pop record by the house band called "Cinnamon Cinder." In 1964, Eubanks produced the Beatles first Los Angeles appearance, at the Hollywood Bowl, and brought them to the club for a press conference that turned into a mini-riot. Yes, they were here, so close to where I now live, and yet I was nowhere to be found.

There's a place in Burbank that used to be called "Jack's Cinnamon Cinder." I wonder if the name was an homage to the original. It didn't get the Cinnamon Cinder name until some time in the late eighties/early nineties. Before that it was a pub.

That was run by Jack Schaeffer who was part of the original Cinnamon Cinder Band. Hence the "Jacks".
From (of all places) IMDB:
Decca recording artist, Jack Schaeffer, a remarkable saxophonist, who after touring the United States and Canada, played in various dance bands which featured saxophone quartet ensembles (Jack on baritone), embarked with his tasty clarinet into the realm of Dixieland jazz, with a stint in a German band, even played in the Trojan marching band while a student at USC, all before joining as an original member of the Southern California surf band of the late 60s, "The Royal Monarchs". Signed by radio personality Bob Eubanks as house band at his Cinnamon Cinder night clubs, they were regulars on his Hollywood Dance Time and The Cinnamon Cinder television shows.

I think you can still buy "Chris & Pitt's" sauce in stores....A girlfriend of mine who loves food often talks of Chris and Pitts, that's how I know all this. Instead not we go to Dr. Hoggly Woggly's or The Swinging Door. Or Mr. Ceicel's, or....well, we get around