Bury it deep down...


The thing that makes me laugh is Mickey pulling down the pictures from the wall.

The first picture is a screen capture from the laserdisc of WHO FRAMED ROGER RABBIT. It is one in a series of four frames that shows Jessica Rabbit is not wearing panties. All other releases of the film have had these frames altered in order to save children from seeing where little cartoon children come from. 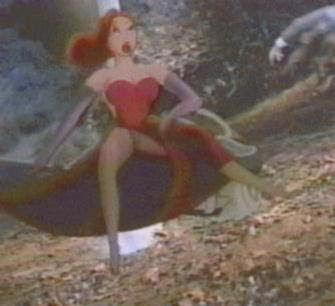 The second picture is from FANTASIA. If you are a proud owner of the 3 disc ultimate box set of FANTASIA and FANTASIA 2000 (and the bonus disc) you own the most complete, fully restored, uncut, mega version of this film. Or so Disney wants you to believe. They lied to you. They lied to everyone in the whole world when they said that film was fully restored.
The second picture Mickey takes down from the wall is of "Sunflower". Sunflower was completely removed from the film for the 1969 re-issue and every re-issue thereafter. The character appears three times during the film and all three have sections of the film have been cut out to ensure you never see that character again. The 50th anniversary DVD is so badly edited that after removal of the third appearance of dear Sunflower, the sound track isn't matching up with the film any more. In fact it's really out of sync. 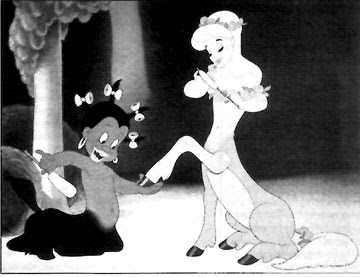 Favorite exchange in this clip:
"Your supposed to be funny?"

You got an intense fascination with all that is twisted Disney don't ya?

yeah.
I do.
It's not like my place is filled with stuffed Pooh Bears.
Those people creep me out.

I dig the park and the anti-history of it. I'm facinated with the cover-ups and the revision of its own history. I cannot go to the park without a camera to document how horrible it truly is. It's interesting to me that people pay so much to have a miserable time. I see more unhappy people there than happy.
The guests pain is my pleasure.
How sick is that!