Dead Puppy returns from the Grave

A puppy in Nanjing returned home seven hours after its owner had buried it in a garden after the dog was hit by car.

The owner, surnamed Xu, was walking the dog last week when it suddenly ran into the middle of the road, where it was struck by a van. The dog was thrown into the air and then dropped heavily into nearby garden. Seeing that the dog had stopped breathing, Xu buried it in the garden. 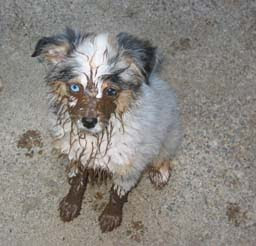 Then in the afternoon Xu received a call from someone at his apartment who said a muddy, bloody dog was waiting outside Xu’s door. Li immediately took the dog to a pet hospital for treatment.

The dog has since recovered and is in good health. Xu said he assumed the dog had clawed its way out of the grave after regaining consciousness.
Posted by Gavin Elster at 12:59 PM

Oh. My. God. I think they need to rename the dog Buffy Summers.

Very sad...poor baby. That expression says so much.

Don't bury Denise Crosby in that garden- she comes back mean!