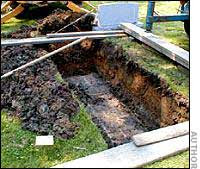 The search for Stephen Grant, the man accused in the murder of his wife Tara Grant, is over. Grant was captured by authorities in northern Lower Michigan early Sunday morning. A manhunt started after an extensive search of the Grant's Washington Township home uncovered the torso of a body in the family garage. Police believe it is the body of Tara Grant who has been missing for three weeks.

Saturday afternoon, Sheriff Mark Hackel said additional body parts were found in a nearby park. A 6 p.m. news conference is planned.
The Saturday afternoon search was hampered by snow on the ground, but Hackel said body parts were found. He declined to release details about what was found, but said the body parts may have been scattered in an attempt to hide them.
``They were in various locations,'' he said.
An arrest warrant was issued Saturday charging Grant with murder, as well as disinterment and mutilation, Hackel said.
Tara Grant has been missing since Feb. 9. Stephen Grant, 37, reported her missing five days later. Police say the day she went missing, the Grants argued over her frequent business trips abroad.
Throughout the search, Stephen Grant has maintained his innocence.
Hackel said his office also was working with prosecutors to determine whether anyone misled investigators, and those people who Hackel declined to identify also could face charges in the case.

Of the charges being brought against Stephen Grant, open murder is punishable by up to life in prison without parole, while disinterment and mutilation carries a penalty of up to 10 years behind bars.

Did he kill her, cut her up, bury her, dig her up, bring some of her home, re-bury parts of her?

Or ...did he Kill her, bury her, dig her up, cut her up, re-bury some choice bits, keep the large cumbersome bit in the garage until the weather warms up enough to bury it proper?

So Stephen Grant is full tilt crazy but does not suffer some odd burial O.C.D.
Good news. Thanks Anon!
Posted by Gavin Elster at 11:59 AM