Disney vows to make yet another film they'll eventually refuse to show. 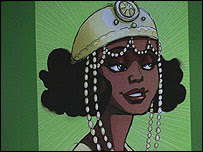 Disney's first black princess.
The Frog Princess will mark a return to traditional animation Disney's next animated fairy tale, The Frog Princess, will feature the studio's first black princess. Maddy is an African-American girl living amid the faded grandeur of New Orleans' French quarter. The movie will also see a return to the hand-drawn animation process, instead of using computer animation that has become the industry standard.
The film will be made by John Musker and Ron Clements, the team behind The Little Mermaid and Aladdin.
Walt Disney Studios chairman Dick Cook said: "The film's New Orleans setting and strong princess character give the film lots of excitement and texture." Composer and singer Randy Newman will provide music for the film, which promised an "unforgettable tale of love, enchantment and discovery with a soulful singing crocodile, voodoo spells and Cajun charm," a Disney spokesman said. The studio said its new princess will be added to its collection of animated princesses used at the company's theme parks and on consumer products.

Now lemme get this straight...
Disney struggles with the shadow of racism on a daily basis because... well... they have issues. So in order to improve their audience appeal and perhaps clean up their act all they could come up with is this.

Not a real princess in a land that can actually have princesses but a made up bullshit fake princess of New Orleans.

Why not start simple. Perhaps an animal story. Why everyone loves talking animals! Maybe a story about a panda. After all pandas are black... and white. That should have a broader appeal doncha think? Perhaps the panda can have a magic ring that grants wishes. Yeah thats it Magic Panda ring.
Disney's PandaRing.
That sounds about right.

I'll wait for the double feature blu-ray disc.
The Frog Princess
together with
Song of the South.
Posted by Gavin Elster at 2:06 PM

Actually, the Randy Newman hiring and making a big deal about hand-drawn art (that will almost certainly follow generic Disney style) makes me think they're shooting for Oscars.

I love what John Stewart said about now african american women will now be held to the unrealistic sexist disney standards that white woman have been held to for decades. (that fking mermaid took away my self esteem.)

Not another Randy Newman soundtrack. I am sick of that dude, and have never got over his "short people" song... a personal slight.

Doesn't Disneywood have ANY one else that sings? Jeebus Christmas!

Dear god ... they do and he just turned sixty this week.
Elton John.
Or there is the person from the brother bear soundtrack, Phil Collins