From the mid-1950s into the '60s, Nike and Hercules missiles protected the Valley and its many defense plants from attack. Four sites could be easily observed. In the Santa Susana Mountains, a missile battery designated as LA88 could be seen in upper Browns Canyon from 1956 to 1965, and its command center was visible on Oat Mountain. A second battery -- with live missiles right amid the suburbs -- known as LA96 operated at 15990 Victory Boulevard in Van Nuys from 1957 to 1971. Its observation post was in the Santa Monica Mountains above Tarzana, along Mulholland Drive on San Vicente Mountain. Decommissioned buildings or remnants remain at each site. 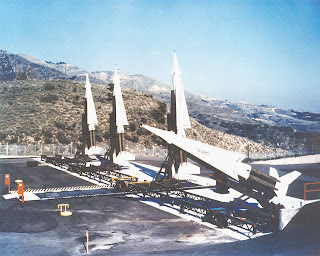 Wow, I never even knew. How bizarre/ominous to have dem big things pointing towards the sky like that.

Yes, and my missle is wearing one. Good point.