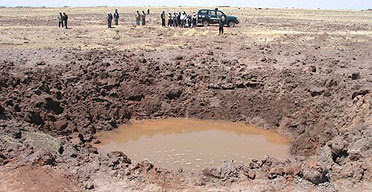 A meteorite has struck a remote part of Peru and carved a large crater that is emitting noxious odours and making villagers ill, according to local press reports.
A fireball streaked across the Andean sky late on Saturday night and crashed into a field near Carancas, a sparsely populated highland wilderness near Lake Titicaca on the border with Bolivia, witnesses said.

The orange streak and loud bang were initially thought to be a plane crashing. When farmers went to investigate, however, they found a crater at least 10m wide and 5m deep, but no sign of wreckage. 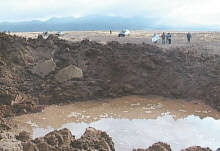 The soil around the hole appeared to be scorched and there was a "strange odour", a local health department official, Jorge López, told Peru's RPP radio.
Later the farmers complained of headaches and vomiting. Police who went to investigate the crater were also stricken with nausea, prompting authorities to dispatch a medical team that reached the site today.

"The odour is strong and it's affecting nearby communities. There are 500 families close by and they have had symptoms of nausea, vomiting, digestive problems and general sickness," said Mr López.

At least 12 people were treated in addition to seven police officers who required oxygen masks and rehydration.

The farmers expressed fears that what appeared to be chunks of lead and silver around the site could contaminate the soil.

Municipal authority, Marco Limachi, reported that after the unidentified glowing object fell from the sky, the citizens of the town of Carancas began to have migraines, nausea and diarrhea.

Limachi stated, "the animals aren't eating and some people are stuttering, it seems to be because they are frightened and worried about the impact."

A member of the National Academy of Sciences, Modesto Montoya, told the state press agency that a fallen meteorite did not present any danger unless it hit some structure on impact.

"None of the meteorites that fall in Peru and make perforations of varied sizes are harmful for people, unless they fall on a house," he said. Another meteorite fell to Earth in Arequipa province in June.
Posted by Gavin Elster at 1:46 PM

Almost sounds like that CREEPSHOW segment where Stephen King plays that farmer that turns into a plant.

Ah yes the title was "The Lonesome Death of Geordie Verrell."