Jabal at Tair (east of Java?) 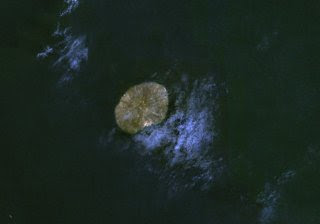 The basaltic Jebel at Tair (currently being spelled Jabal el Tair by Canadian media) stratovolcano rises from a 1200 m depth in the south-central Red Sea, forming an oval-shaped island about 3 km long. Jebel at Tair is the northernmost known Holocene volcano in the Red Sea and lies SW of the Farisan Islands. Youthful basaltic pahoehoe lava flows from the steep-sided central vent, Jebel Duchan, cover most of the island. They drape a circular cliff cut by wave erosion of an older edifice and extend beyond it to form a flat coastal plain. Pyroclastic cones are located along the NW and southern coasts, and fumarolic activity occurs from two uneroded scoria cones at the summit. Radial fissures extend from the summit, some of which were the sources of lava flows. The island is of Holocene age, and explosive eruptions were reported in the 18th and 19th centuries. 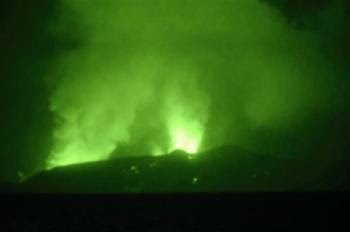 Ken Allan, a Navy spokesman, said a NATO fleet just outside the territorial waters of the island reported seeing a "catastrophic volcanic eruption" at 7 p.m. local time. The two-mile-long island is about 70 miles off the coast of Yemen.

"At this time, the entire island is aglow with lava and magma as it pours down into the sea. We do not have confirmation of how many people were on this island at the time of the eruption," Allan said in an e-mail.

"The lava is spewing hundreds of feet into the air, with the volcanic ash also (rising) a thousand feet in the air," Allan said.

Oil Minister Khaled Bahah told the news agency that the "increasing" volcanic activity in the island was first registered on Friday after a mild quake measuring 3.7 on the Richter scale struck off the coast of the mountainous island

Update 10/1/07 12:25pm
While the island has no civilian population it is home to Yemen military installations used by their navy. According to the AFP four soldiers were burned to death and nine soldiers are still unaccounted for in the aftermath of the eruption.

BBC b-roll of the eruption:

Thankyou for the only intelligent report on this eruption I have found so far.

I'm all about the volcanos.

This one took me by surprise. I've been expecting the next big one to be in Alaska.