Miyoshi Umeki, 78, a Japanese-born singer and actress who became the first Asian performer to win an Academy Award -- for "Sayonara" (1957) -- and who played a housekeeper on the TV series "The Courtship of Eddie's Father," died Aug. 28 at the Licking Park Manor nursing home in Licking, Mo. She had cancer.

Ms. Umeki played the role of Mei Li in the 1961 film version of "Flower Drum Song" and appeared in a handful of mediocre East-meets-West romances, comedies and dramas -- "Cry for Happy" with Glenn Ford, "The Horizontal Lieutenant" with Jim Hutton and "A Girl Named Tamiko" with Laurence Harvey.

She gladly retired in 1972 after a three-year stint playing Mrs. Livingston on ABC's "The Courtship of Eddie's Father." The sitcom, starring Bill Bixby, was based on an earlier Glenn Ford film about an urbane widower being set up on dates by his son. 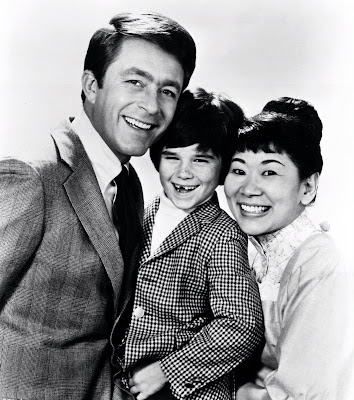 One of my only recollections of that show was the episode where Mrs. Livingston lovingly sews a teddybear for Eddie but is beat down like a dog who chews slippers because she sewed it out of an old American Flag. I thought Mr. Eddie's Father was a real jerk. I never understood why he didn't marry her. I hated the themesong but still watched the damn thing. I actually liked the ADR conversational long shots of Eddie and his father even though, at that age, I could tell they wern't speaking.

Ms. Umeki completely withdrew from public life after "The Courtship of Eddie's Father" ended. She co-owned and operated a business renting editing equipment to film studios and university film programs before moving to Missouri from North Hollywood, Calif., about five years ago. The only time she performed was about four months ago, when she taught her granddaughter a Japanese song.
Posted by Gavin Elster at 8:40 AM

I bought a copy of "Flower Drum Song" recently and in the commentaries Nancy Kwan says that no body knows whatever became of Ms. Umeki. Well, sadly, now we do.