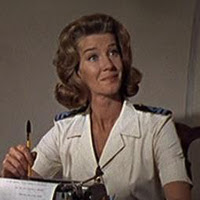 Actress Lois Maxwell, who starred as Miss Moneypenny in a string of James Bond movies, has died aged 80.
Maxwell starred alongside Sir Sean Connery in Bond's first movie outing, Dr No, in 1962.
She played the role until 1985's A View To A Kill with Sir Roger Moore, who told the BBC she had been a "great asset" to the early Bond movies.
Aged 58 when she made her final Bond appearance, she was replaced by 26-year-old Caroline Bliss for The Living Daylights.
As well as her acting career, she also worked as a columnist for the Toronto Sun newspaper.
Her last film role was in the 2001 thriller The Fourth Angel, alongside Jeremy Irons and Jason Priestley.
Posted by Gavin Elster at 10:23 AM