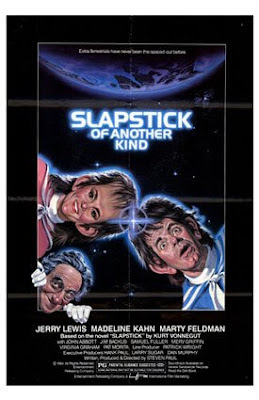 "Slapstick: of another kind" seems to have avoided DVD in the USA. While it may not be the worst film ever made it is certainly in the running. Here is a synopsis of the film. It reads far better than it is.

The People's Republic of China is severing relations with all other nations. They have mastered the art of miniaturization, and have shrunk all their people to the height of 2 inches. The ambassador of China, Ah Fong (Pat Morita), announces during a press conference that they key to all knowledge can be found from twins.

Caleb Swain (Jerry Lewis) and his wife Letitia (Madeline Kahn) are called 'the most beautiful of all the beautiful people' by the press. However, when Letitia gives birth to twins who are called "monsters." The family doctor, Dr. Frankenstein (John Abbott) informs the parents that the twins won't live more than a few months. The Swain's decide to allow the twins to live their short life in a mansion staffed with servants, including Sylvester (Marty Feldman).

Fifteen years later the twins (also played by Lewis and Kahn) are "still alive." They have large heads and appear to be retarded. Their parents, who have not seen them in all those years, receive a visit from the former Chinese ambassador who inform them that their children are genuises who can solve the world's problems. They dont hold a candle to Chance the gardener!

The parents, along with the US president (Jim Backus) pay the children a visit. They reveal themselves to be well-behaved and intelligent, explaining that they acted "stupid" around the servants because they were simply emulating them.

A series of tests reveal that there is a telepathic connection between the twins, and their intelligence is only functionable when they are together. Furthermore, when their heads are touching they reach a level of intelligence that has never been surpassed.

Their parents, fearful that incest may be prevalent, separate the two. They become despondant without each other, and the Chinese ambassador appears again to tell them to seek each other out. Once united, a spaceship appears and reveals that they are really aliens who were sent to Earth to solve all of the planet's problems. However, their alien father (voice of Orson Welles) reveals that Earth cannot handle their intelligence and returns them to their home planet. Whoa. Now imagine that film but not funny. It plays much better as a horror film.