A little more about THE 5000 FINGERS OF DR T 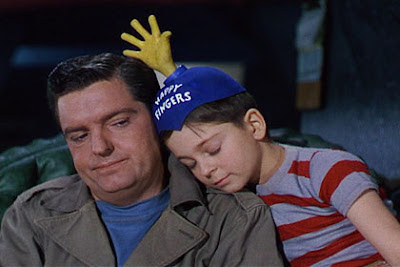 Seuss's live action feature film The 5000 Fingers of Doctor T represents the fullest elaboration of Seuss's conception of children as "thwarted people," struggling to find their own voice in a world dominated by dictatorial adult authorities. When we read through Seuss's notes and original drafts for the script, we see strong evidence that he was consciously mapping permissive child rearing doctrines over images associated with the Second World War.

5000 Fingers deals with the plight of an average American boy, Bartholomew Collins (Tommy Rettig), who finds learning to play the piano a threat worse than death.His instructor, Dr. Terwilliker (Hans Conried), is an old school authoritarian, who insists that "practice makes perfect" and who demands constant drill and repetition. The bulk of the film consists of Bartholomew's dream, in which he and the other boys rise up and overthrow the dictatorial Terwilliker and his plans to dominate the world through his music. As Seuss explained in a memo to the film's producer, Stanley Kramer: "The kid, psychologically, is in a box. The dream mechanism takes these elements that are thwarting him and blows them up to gigantic proportions."

If this description foregrounds issues of child psychology, concerns central to the finished film, the early drafts of the script make frequent references to the struggle against fascism. In Bart's waking reality, Dr. T is "not especially frightening," a "tight lipped and methodical looking old gentleman ... no more vicious and harmful than Victor Moore." Once we enter Bart's dream, however, Seuss increasingly characterizes Dr. T as the reincarnation of Der Fuhrer. Seuss describes his kingdom as "plastered with posters, showing Dr. Terwilliger in a Hitler-like dictator's pose." His soldiers wear medals that "resemble an iron cross, only it is engraved with a likeness of Dr. Terwilliger in the center." The mother has a "devotion to the man...bordering on the fanatical," a "gauleiter-like allegiance" which blinds her to her son's agonies. When he is challenged, Dr. T "flies into a Hitlerian rage." He sees the "piano racket" as a scheme for global domination, and his study is decorated with an enormous world map captioned "The Terwilliger Empire of Tomorrow." He has built a massive piano, designed for the enslaved fingers of 500 little boys, upon which he will perform his musical compositions.

Many traces of this Hitler analogy find their way into the final film. The sets are hyperbolic versions of monumental Bauhaus architecture, and the grand procession borrows freely from Leni Rieftenstahl's Triumph of the Will, with his blue helmeted henchmen goose stepping and holding aloft giant versions of his "Happy Fingers" logo. Terwilliger's elaborate conductor's uniform, one reviewer noted, was "a combination of a circus band drum major, Carmen Miranda, and Herman Goering." Most of the Henchmen bear Germanic names. Hans Conried's long thin body and his floppy black hair closely resemble Seuss's PM caricatures of Hitler (minus the mustache). The fact that Conreid had provided some of the narration for Design for Death, performing the voices of the fascist leaders, could only have strengthened the association for contemporary viewers. Even the film's musical score bore strong Germanic associations; its composer, Eugene Hollander, had studied under Richard Strauss, done music for Max Reinhardt in Berlin before the war, and was the musical director for The Blue Angel.

Some of the film's more disturbing images drew on popular memories of the Nazi concentration camps. Arriving by yellow school buses, rather than railway cars, the unfortunate boys are herded through gates, where their comic books, balls, slingshots, and pet frogs are confiscated. Then, they are marched off to their "lock-me-tights" in the dungeon. There, Dr. T dreams up fiendish (and Dante_esque) tortures for all those who refuse to play his beloved keyboard. The captive musicians have sullen eyes and sunken cheeks, lean and gaunt in their prison uniforms.

In constructing the more sympathetic plumber, Zlabadowski, Seuss drew upon other associations with the war. In the first draft of the script, Zlabadowski is described in terms that strongly link him to Eastern Europe. "Shaking his head sadly in deep Slavic gloom," Zlabadowski is "a big shaggy edition of Molotov, a kindly Molotov with the cosmic unhappiness of Albert Einstein." As the script progresses, Zlabadowski abandons all of his Slavic associations, except for his rather distinctive name, becoming a more all-American type, a reluctant patriot who must first shed his isolationist impulses before he can be enlisted as Bart's ally in the struggle to stop Terwilliger. In one of his notes about the script, Seuss summarizes the character: "Z's conflict: Desire to help people. Desire to keep out of trouble. An old soldier trying to be a pacifist. He's tired of war. It's futile." In the early drafts, Zlabadowski knows Terwilliger's evil plans, but he doesn't want to get involved if it means losing his overtime pay for installing the sinks.

In the finished film, many of these adult concerns have vanished. Zlabadowski represents the ideal permissive parent Initially, he is a bit distracted by his work and eager to make a buck, a bit eager to dismiss Bart's warnings as wild eyed fantasies. Ultimately, he becomes a warm-hearted playmate (engaging the boy in a pretend fishing trip) and a wise counselor (helping him concoct from the contents of the boy's pockets a sound-stopping device). Angered by his initial indifference, Bart challenges his adult privileges and sings a song that might have been the anthem for permissive child rearing:

Proclaiming children's rights, Bart denounces adult assumptions that deeper voices, facial hair, or wallets justify unreasonable exercises of power over children. Zlabadowski regains his idealism: "I don't like anybody who pushes anybody around." The two cut their fingers with Bart's pocketknife and take a blood oath that binds them together,father and son,in the struggle against Terwillikerism.

In the film's opening scene, Bart off-handedly remarks upon the death of his father, presumably during the war, and Zlabadowski and Terwilliker are cast as good and bad surrogate fathers, respectively. In his nightmare, his piano crazed mother is hypnotized into accepting Terwilliker's hand in marriage, a deal to be consummated immediately following the great concert. Not unlike Lord Droon in The King's Stilts, Terwilliker represents the pre-war Patriarch who demands obedience and silence from his children. In his fantasy, Bart hopes that the more permissive Zlabadowski will fall in love with his mother and become his father, an arrangement consummated by their blood oath. Zlabadowski understands the needs of boys; he represents the manly virtues of fishing and baseball against Dr. Terwilliker's effeminate high culture, defending America against Terwilliker's Germany.

In the end, the task of finding the right father and overcoming the bad patriarch falls squarely on Bart's shoulders. He alone will face down Terwilliker, using his "very atomic" sound-catching device to disrupt the concert and liberate the children. The closing moments, where rebellious children hurl their music sheets in the air, shouting in defiance, stomping on and punching the piano keys, represents one of the most vivid images of resistance in all of American cinema. By this point, Bart's struggle against Terwilliker has absorbed tremendous ideological weight, a struggle of the freedom fighting all American boy (with his red and white striped shirt and his blue pants) against an old world tyrant, the struggle of those who are "closer to the ground" against those who "shout" and "beat little kids about," the struggle of permissive parenting against more authoritarian alternatives.
Posted by Gavin Elster at 1:04 AM

I still prefer "Dr. T and the Women", and of course Mr. T Cereal.

Your a republican so... the only thing you prefer is tiny hands on your johnson!