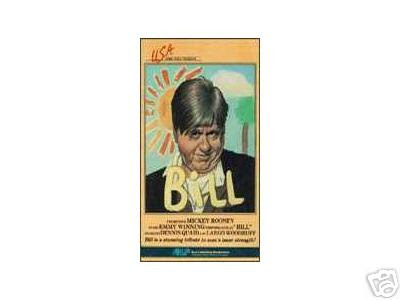 Bill, a retarded man, ventures out into the world for the first time. Having spent most of his life in a dreary inner city Institution. He is taken in by a kind family and learns what it means to love for the first time in his life.


Yet another actor taking a stab at being retarded. This time a crazy person is hired to play a mentally challenged man. His portrayal was awkward and insulting. This "drama" actually had a TV movie sequel entitled BILL ON HIS OWN.
Posted by Gavin Elster at 2:29 AM

Mickey Rooney- always a class act. I loved his subtle portrayal of a Japanese apartment manager in Breakfast at Tiffany's.

Mr. Yunioshi is a crass act.