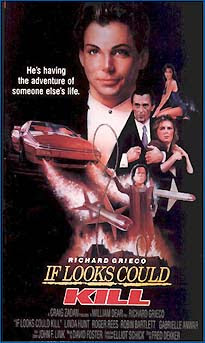 IF LOOKS COULD KILL

As the reigning teen idol of 21 Jump Street and Booker, Richard Grieco tested the big screen in this farce. If Looks Could Kill should be admired for the ripping off virtually every Bond film with shameless abandon while thankfully staying away from the slapstick of Spy Hard or the hallucinogenic stupidity of Casino Royale.

Grieco is Michael Corbin, high-school slacker (even though Grieco was 26 at the time) who goes to Paris with his French class for a much-needed foreign language credit. Naturally there’s a super-spy booked on the same flight who just happens to have the same name. Convenient confusion results, the spy Corbin is killed, and the student Corbin is suddenly the target of a maniacal would-be dictator (Roger Rees), his diminutive assassin (Linda Hunt), a big-breasted femme fatale named "Aureola" (wink, wink), and a large man with a steel hand who grunts a lot and bumbles around with the same endearing buffoonery that made Jaws so popular.

Bond references hurled at the viewer en masse. Taken by the British Secret Service to their laboratory, Corbin is given the traditional gadgets: explosive chewing gum, x-ray glasses, and a Lotus Esprit complete with tuxedo in the trunk. Before long he’s -- you guessed it -- playing baccarat with the villain in a casino, introducing himself as "Corbin ... Michael Corbin," and gallivanting around the countryside with a beautiful waif (Gabrielle Anwar in an early role) bent on revenge. All this time, his French class and their witch of a teacher get mistaken for a group of mercenaries and are kidnapped, then released, then kidnapped again, without ever realizing it.

Taken in context, If Looks Could Kill is a hysterically funny romp through the warped mind of a screenwriter intent on going way over the top. As such, the only time the film falters is when it slows down to needlessly develop the obligatory romantic subplot. Aside from some violence that borders on disturbing in the comedic way it’s played, there’s nothing even remotely serious about this film.

Predictably, If Looks Could Kill was hammered by most critics. But in a daring move, Roger Ebert gave it a "thumbs up" and said it "plays like a head-on collision between [James] Bond and Indiana Jones, if the primary goal of both of those heroes was transcendent silliness." If Looks Could Kill gives us the best of all worlds: it’s a Bond spoof made with a big budget and written securely in contemporary comedic style.

And whatever happened to Richard Grieco? He released a music CD in Europe and can be found on his Official Web Site (www.rgrieco.com ohhh sorry its been defunct for quite some time.) Well...
You can find pictures of Richard at www.AWFULPLASTICSURGERY.com

As for the movie? It is not offered on netflix simply because WARNER BROS has not bothered to make DVDs. The last release was on February 7th 1995 on fabulous VHS. Check your local thrift store.
Posted by Gavin Elster at 7:37 PM

I've seen this on cable. Truly a terrible film.