Talk about your suck ass cartoons! 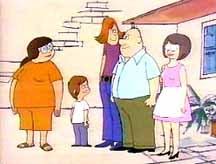 Boy I cant tell you how much I hate this cartoon!

Wait Till Your Father Gets Home chronicles the lives of the Boyles, your average 1970's American family. Harry Boyle, the father, owns a restaurant supply company. His wife Irma portrays the typical housewife, with an occasional independent flare. Harry and Irma have three children: Chet, Alice, and Jamie. Chet, who is 22, is a college dropout, who spends most of his time sleeping. Alice is a rather robust 16-year-old, who teams up with her mother, to display the independence of women, in the 70's. Jamie is the Capitalist of the family, even though he is only 9.

The show is set in the suburbs of Los Angeles, on Elm Street, to be precise.

During the 1973 season, the show was host to many celebrity voices, including: Don Knotts, Phyllis Diller, Maude, and many more. The reason for this was that many of these guests were carried over from The New Scooby-Doo Movies, which was recording at the time.

According to Joe Barbera's biography the show should have been a hit; however, the show was produced on a low budget at another studio, so it did not see the success that it might have, if it was produced at Hanna-Barbera Studios.

I love my Mom and Dad and my brothers too,

And the groovy way we get along,

But every time the slightest little thing goes wrong,

Wait till your father gets home.

Dad's not so bad, and he seldom gets mad,

And we aren't about to desert him.

And what Dad doesn't know won't hurt him.

I think my Mom's just swell, but she starts to yell,

Everytime we have a ruck,

Wait till your father gets home.
Posted by Gavin Elster at 3:08 PM

"During the 1973 season, the show was host to many celebrity voices, including: Don Knotts, Phyllis Diller, Maude, and many more."

How dare you. She doesn't rate a proper credit?

I hope Hunter reads this and thinks about me.

She has another name? Is it Paul McCartney? They look the same.

" Barbara Broccoli has made the official announcement on behalf of Eon Productions to the British Press that 23 year-old cricket player Galton Leigh of Johannesberg, South Africa will indeed become James Bond number 6. " WTF??? Babs selection really paid off I see!

THANK GOD AND YIPEE! Although now I'm curious to watch an episode of this or two...

WTF? What bizzaro world does this blog come from? I'd like to see this mystery bond film that they are talking about. So I gather barbara and michael do a lot of ass talking?

I want to suckle Maude's sexy toes...bunions and all.