He's a genius and a madman. 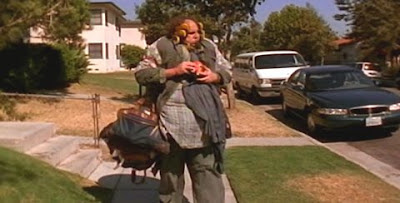 Reflections of Evil is a 2002 cult film by independent filmmaker Damon Packard that depicts the descent into madness and death of an obese, homeless watch salesman played by Packard. Using unconventional editing, Packard splices scenes together with nostalgic commercials and B-movies of the 1970s while also blending together several tangential narratives. The film also makes several oblique references to 9/11 and conspiracy theories including the notion of chemtrails. In an interview, Packard claimed, "I barely scratched the surface of this area" Reflections of Evil conveys heavy motifs of anger, fear, alientation, and madness.

A surreal end sequence that was filmed illegally at Universal Studios in Hollywood (including the ET Adventure) earned Packard a lifetime ban from the theme park. One only wonders if Spielberg himself has seen the film. Rumor has it that Spielberg and Lucas have tried to sue Packard.

The film was distributed by Packard himself, who literally stuffed mailboxes with his film and handed out copies around Los Angeles, California , although Packard admits that the result was less than spectacular. He has jokingkly claimed that his next film will be titled, "No Response: The Movie". I recieved my copy after Packard blanketed the parking of my old work with DVD's on everyones winshield. Mana from Hell! This film is the best I have seen. It is infectious. I cant truly describe the impact of this film. You have to see it. If you were born between 1964 and 1974 this movie will affect you. If you were born after that I suspect you will hate it.
Packard made 62,000 DVD copies of the film available for free, as well as sending thousands of them them to celebrities whose reactions were hilariously recorded on his website www.reflectionsofevil.com. His Reflections spoof of a young Steven Spielberg, a director he claimed to admire, was matched by his later assault on George Lucas in The Untitled Star Wars Mokumentary (2003), in which he intercut actual footage of Lucas with staged shots of disgruntled Lucas employees. A cult hero to underground film devotees, Packard remains obscure to the public at large while continuing to turn out his odd pastiches that some regard as genius.

Packard is a resident of Eaglerock Californina and has claimed that copies of the film can be found, from time to time, at the Bank Of America ATM on Colorado Blvd. I unfortunally gave my copy away and have to actually purchase another. PURCHASE! Thats how good this film is. When have you known me to buy ANY entertainment?
Posted by Gavin Elster at 8:07 AM

A filmmaker that actually lives in Eaglerock? Is that possible? Quick lets go worship him!

What's the big deal about a lifetime ban from Universal Studios. Hell, I've got one of those (for stealing pictures off a tram), but it didn't keep Universal from giving me a season pass a couple of years ago.

Its a selling point for him.