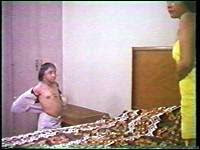 I have a soft spot for Bond outings (as most folks do) and an even softer one for rip-offs and spoofs.

Starring Weng Weng (pronounced Wang - can you see the jokes off in the distance?), a three-foot tall Aztec-lookin’ burn victim dude with a Moe Howard haircut and an Elvis white suit (the freakin’ lapels are about as wide as he is tall!). Voiced by someone who has seen WHATS UP TIGERLILY too many times. He sounds like a cross between David Sedaris and a rrrreeeeeaaaallllly gay deaf Paul Rubens. This secret agent extraordinaire is called into action to take down the nefarious Mr. Giant. A powerful villain (we know this because he communicates with people though a internally lit beauty mirror that makes cheesy Dr. Thoeopolous noises) who has kidnapped a famous scientist who has created the formula for an "N" bomb that could end life as we know it.(Yep like the one Michael Richards dropped a few times didn't do the trick?) Mr. Giant also runs a drug cartel and has lots of worthless henchmen that get their nuts kicked by a elf in a leisure suit. (or is he a dwarf?) The henchmen are voiced by people who know damn well no one will ever see this so they pull out all the stops. Bogart, Cagney and Lorre are all present. These voices are not acceptible for a Simpsons episode but oddly they flourish here. 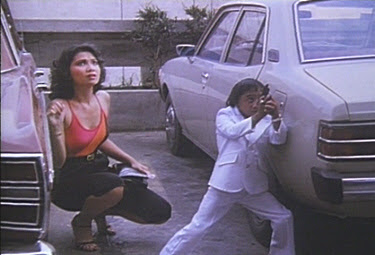 Before 00 takes on the case of busting Mr. Giant’s nefarious plan of world domination he is fully outfitted with the latest secret agent gadgetry – toys that would have James Bond having tantrums of envy and demanding a pay rise. First up there is a fabulous pendent that is to be used for “two way communication” and a ring (that he never needs to use) which detects all poisons. He is also given what his boss describes as a real “humdinger” of a gun that has been specially designed for 00 keeping in mind his physique. There is also a nifty looking grey hat which makes Odd Job’s accessory seem like an flaccid antique. This lethal weapon of a hat does everything Odd Job’s memorable hat did but so much more. This deadly grey hat can be deployed in any hairy situation and once set in motion it is controlled by the poison detecting ring. He is also given a nifty looking pen that doubles as a deadly killer dart gun as well as a utility belt. This belt is equipped with all sorts of deadly high tech wizardry but perhaps its most telling attribute is its ability to “slice through steel bars” when the need might arise. He also already has a fantastic watch in his possession that performs a host of sophisticated functions. Finally he is given a set of brilliant shades which when employed allows one to see through people’s clothing and even the thickest material. Rayon and lead clear as crystal! So 00 is thoroughly decked out with the finest gadgets as he sets off on his mission to bring Mr. Giant to justice and to crush his burgeoning crime syndicate. For the most part the use of the gadgets is a useless payoff as his first line of defense is to kick an opponent in the balls. Lots of ball kicking. I mean... lots.
It's a little Bond (ba dam chi) and a little Enter the Dragon, as Weng must wend his way into the hideout of Mr. Giant only to find Mr. Giant is also a kung-fu ass-kickin’ shorty too!
A fine film indeed. Your knowledge of film astounds me at times. Pretty amazing.

So much of the stuff I read here is often learning experiances for me. Awesome!