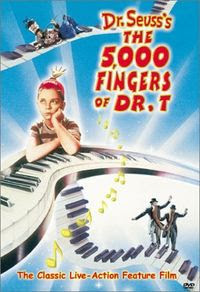 "The 5,000 Fingers of Dr. T" first graced movie screens in 1953. Though not much of a commercial success, it did at least garner one Academy Award nomination that year for Best Musical Score which it lost to "Call Me Madam." (And does that film have a cult following? I think not) The rest of the film's cast and crew went on to have illustrious careers beyond the children's film genre. The lead co-stars, Peter Lind Hayes (Mr. Zabladowski) and Mary Healy (Mrs. Collins), already Broadway stars, continued to develop their film careers together; Hans Conreid (Dr. T) and Tommy Rettig (Bart) found great success on TV (remember him from "Lassie"?) and the big screen; though production designer Rudolph Sternad's breathtaking work in "5,000 Fingers" was overlooked by the Academy, he went on to enjoy a total of three nominations for later films. And of course we all know about the illustrious career of the film's screenwriter and lyricist, Dr. Seuss.

The Hollywood studio execs knew that this film was something special and had not gotten the reception is deserved. "The 5,000 Fingers of Dr. T" - indeed an "all new kind of wonder-musical" as its tagline avers - was almost too new for 1953. Thus, the film was re-released some years later under the apt but trite title "Crazy Music." However, it wasn't until those hazy, crazy days of the sixties that a new fan base raised their droopy lids and chuckled appreciatively. The stream-of-consciousness story-line, Dali-esque sets and bizarre musical numbers eventually found a small but avid cult following that appreciated the hallucinatory and psychedelic style of filmmaking. 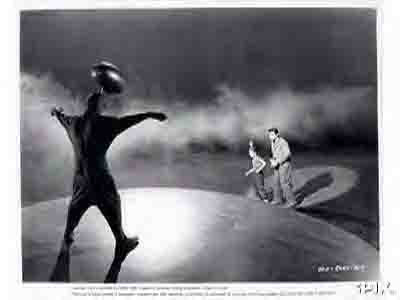 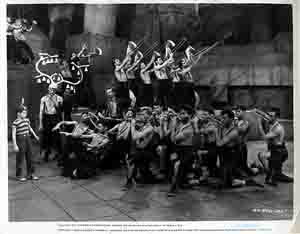 The unique weltanschuung (hey I found a new word!) of this film is especially impressive when one considers that it was created as an Eisenhower-era children's musical. By presenting the film as an extended child's fantasy "5,000 Fingers" goes well beyond the boundaries of juvenile cinema established by Disney Studios; even "Fantasia" can't hold a candle to this extravaganza. From the brutally funny "Dungeon Song" to the charming ode to cross dressing, "Do-Me-Do Duds," Dr. Seuss's story pushes the envelope of conventional musical material.
The films copyright was renewed in 1980 so someone at (what was) Columbia Studios was on the right track. A DVD was released in the United States in 2001. The DVD is far from overwhelming. No restoration was done. The image is plagued with film anomolies and misstimes. Above all There is nothing really in the way of bonus features that are releated to the film. There were several songs trimmed from the film and a completly different opening that has been lost. If SONY decides to strap on a sack and remaster this DVD correctly I hope to god they search that damn vault and produce those cut scenes. If that isn't possible then Sony should add the songs onto the DVD as bonus audio tracks. It is clear that there is an isolated music and effects track for this feature since there is a French and Latin American Spanish translation on the DVD. The official vinyl soundtrack is hard to find yet has all the songs that were recorded for this feature including the ones deleted from the final release of the picture. The soundtrack also has the full length version of the overture and opening number of the film. The track is much longer than the actual opening of the film and the music is not used elsewhere. Where are these scenes? Clearly they scored them. That leads me to believe there was an alternate cut of this film. Where is a restored version of this film? DELETED SCENES? A DAMN TRAILER? ANYTHING? I hope SONY does not put this on the REMAKE list but instead gives the original the attention it deserves.
Posted by Gavin Elster at 12:03 PM

"Is it dangerous?"
"VERY dangerous... it might even be ATOMIC!"

When I saw this, it certainly didn't remind me of the Wizard of Oz at all, that's for sure!

Barts entrance into a fantasic land is simply that he "falls into a dream state as dorothy did in the wizard of oz.

Bart and Terwilliger where have i see that before?

I never even knew this film existed.

It's German for "The Bart The".

M,
You have to see this film. Hell I'll mail you a copy if you cant get your hands on one! It is too goofy to be believed!