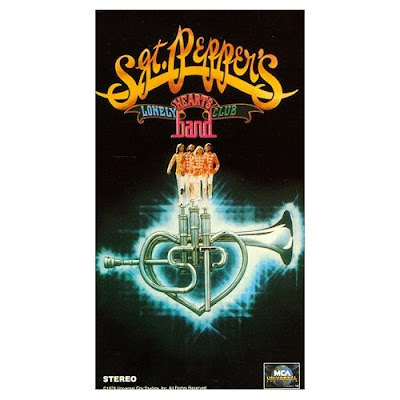 Why why in the hell did I just watch SGT PEPPERS LONELY HEARTS CLUB BAND?

1. I remember the trailers for the film were airing at the same time STAR WARS was being re-released in theaters in 1978. It looked very colorful.
2. It cant be as bad as I remember.
3. I don't remember much.
4. Netflix made it easy.

An ill-advised attempt to bring the music of The Beatles to life in the pre-MTV era. The only performers who seem to have a pulse are Aerosmith ("Come Together") and Billy Preston ("Get Back"). Everyone else is on autopilot. Alice Cooper ("Because"), Steve Martin ("Maxwell's Silver Hammer") and a properly embarrassed looking George Burns ("Fixing a Hole"), who also narrates the story, opt to talk their way through songs. The film is nothing short of a disaster. RSO Records shipped 500,000 copies of the film's soundtrack to record stores when the film was released, immediately earning a Gold Record Award for the producers and performers. But when retailers couldn't give the albums away and the film died at the box office, the Recording Industry Association of America (which issues the awards) reportedly asked for the awards back. Making a promise it couldn't keep, the studio used the advertising slogan: "A Splendid Time Is Guaranteed For All." 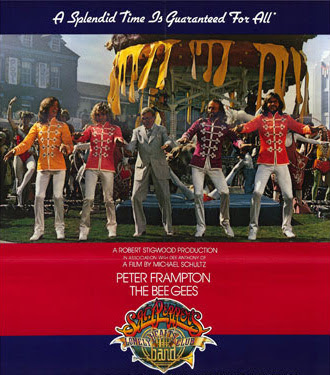 The one thing this film does is TOTALLY encapsulate the weird transition-phase that pop-culture went through as it kissed the seventies goodbye and leaped into the eighties. Everything is SO colorful, everyone looks SO innocent. It was a forced look. Thats not to say that this was the music and the attitude of the time but the difference in the films world to anything in the real world shows you the drastic change pop music was going through at the time.

I have to say the film is pretty horrible. It is nonstop music as if it tried to be TOMMY but couldn't pull it off without a sappy narration. Peter Frampton looks like a little kid. I thought he was so old and bald when this film came out but he looks fairly young and slightly retarded. The is not one BEE GEE that is remotely good looking. Steve Martin's shtick is not funny and again retarded but this being his screen debut... I'll cut him some slack.
If I remember correctly there was some union flack when this film was made... some sort of strike or labor dispute. I cant find anything on the internets about the filmmaking climate at the time this was made. Anyone have any info on this film and the troubles it faced please let me know.

The only redeeming thing about this film is the ability to see what Sunset Blvd. looked like in the late 70's. Lots of nice, wide, location shots showing off the strip. Wait ... there is one more thing...
This was the only on screen appearance in a motion picture by Minnie Riperton. She is in the final scene.

5. (real reason why I saw it) I wanted to get myself ready for the release of what could be called the sequel to this horrid film SEE THE NEW FILM TRAILER HERE
Posted by Gavin Elster at 8:19 AM

Didn't the album come out before the film?

Yes it did and that is how they claimed it got a gold record by the time the film was released. RSO was a mess. What happened to Robert Stigwood?

I'm afraid to see this, but have already heard the horrid soundtrack which only makes me long for the originals.