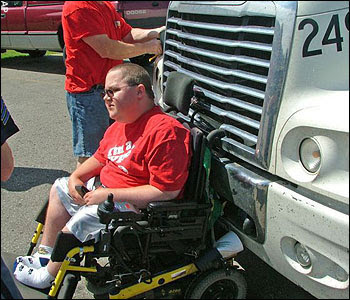 Ben Carpenter's electric wheelchair accidentially got hooked onto the front grill of a semi-truck at a stop light in Michigan and Ben had no idea he was in for the ride of his life. The driver of the truck had no idea what was going down and when the light turned green, he hit the gas. Nearby motorists immediately contacted police as they watched Ben Carpenter fly along the highway in Michigan.
The truck driver had no idea he was pushing the man down the street Wednesday afternoon until he turned into the lot of his business and was stopped by an undercover police officer who had spotted the incident on the highway.
911 call #1

"I tried to yell for help, but no one could hear me," said Carpenter of Kalamazoo, Mich., who has muscular dystrophy, which put him in a wheelchair more than seven years ago.
911 call #2

The truck, he said, was going 50 m.p.h. Luckily, Carpenter always straps himself into the chair, so he felt secure that he wouldn't fall out. But he was pretty sure he was going to die.
911 call #3 (the good one!)

"I didn't know how far he was going," he said of the driver, whose name was not released Thursday. "I think people were looking at me."
911 call #4 (the operator is sick of these damn calls)

When police finally stopped the driver, he didn't believe what they were telling him. Ben remained calm even though his drink went flying. He told a reporter, "I was probably thinking that this is going to keep going and not stop anywhere."
Posted by Gavin Elster at 4:05 PM

Now if he had Paris Hilton strapped on his lap, that would be a real story. I haven't heard her name often enough today.

I'm hope france changes the name of that city in protest.

This story about the FREE RIDE must've been so scary for that poor dude, but in retrospect it is kind of funny.

The fact Hilton and the capital city of France share the same name lends itself to endless puns! I LOVE IT!