Marc Forster will direct the next Bond adventure, due out Nov. 7, 2008.

"I have always been drawn to different kinds of stories and I have also always been a Bond fan, so it is very exciting to take on this challenge," Forster said in a statement Tuesday from Sony Pictures, one of the studios behind the Bond franchise.

"The new direction that the Bond character has taken offers a director a host of fresh possibilities," said Forster, director of last fall's Will Ferrell comedy "Stranger Than Fiction," "Monster's Ball," which won Halle Berry the best-actress Academy Award, and "Finding Neverland," a best-picture Oscar nominee.

Daniel Craig will return to play Bond after his debut as the British superspy in last year's "Casino Royale," a hit with critics that became the top-grossing Bond movie with nearly $600 million worldwide. 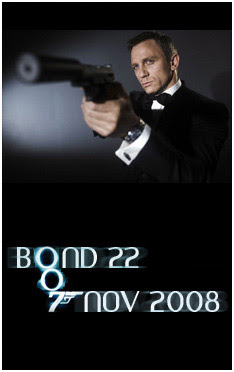 Gavin - thanks for your comments on my blog - for the record, the "fratboy" explanation was not written by me, but is an amalgamation of information written by others. I've been to France many times, have French friends, and have had the "real" absinthe...so I know the drill, I just wasn't all that concerned with posting a million words on my blog.

Gotcha. Your blog is great!

When I think "Bond-style action movie," I think "Stranger than Fiction."

I think FOR YUR HEIGHT ONLY.