Please excuse this post as it is coming from my iPhone. I don’t have computer access right at this very moment.
Since FBI profiler John Douglas is busy I thought I'd track down another famous Douglas to chat about Steven Spreafico's amazing lack of talent.
So I took a quick trip into Beverly Hills today to see if I could sit down and have a chat with Kirk Douglas’ agent. I’d like to get Spartacus’s opinion on Steven Spreafico’s videos.
Meeting people in person is more…personable don’t you think?
So into the bowels of William Morris I went. The first stop was this waxy-faced eyebrow plucker at the front desk. I was trying to explain my project to the receptionist while she was looking up if Kirk Douglas was even represented by them and the craziest thing happened. Some nutbag was in the front lobby causing a scene. Or at least that’s what I heard on the security guys radio. The one swiftly moving my way. I spun around to see if I could get a look at the crazy person The only other person in the lobby was a guy that looked like Rob Schneider but short. Really Short. Like dwarf sized so it couldn’t have been him. He was muttering something about the film Chuck & Larry. Every second word out of his mouth was Fuck. But not like a mad FUCK. It was more of a desperation fuck. Like when you cause a car accident. The next thing I know I feel a sting in my chest and I could hear clicking and what inexplicably sounded like a really long fart.
I came to with this as my view. (thanks iPhone!) I was in the back of a police car. 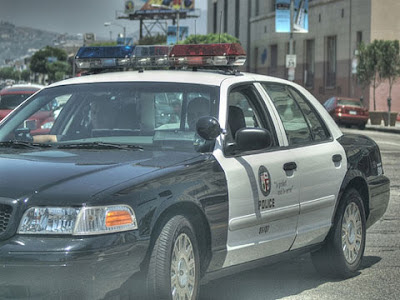 I guess since 9/11 people are still jumpy when it comes to strangers.

Steven's talent is something real special. So special in fact he should join forces with the most popular special band in the world, The Kids of Widney High!
Here is their video for their smash hit NEW CAR!

Well tomorrow I will try and contact the most powerful Douglas of all and We’ll finally get to the bottom of this Steven Spreafico freak.
Posted by Gavin Elster at 7:39 PM

I can't wait until "E! True Hollywood Story" shows up on my doorstep looking for quotes on your early life. I've got the perfect Revolutionary Costume to wear!

The best kind of clothes for a protest pose
Is this ensemble of pantyhose
Pulled over the shorts, worn under the skirt
That doubles as a cape.

To reveal you in capri pants
You fashion out of ski pants,
In a jersey knit designed to fit
The contour of your shape.
Then cinch it with a cord from the drape.

I can't wait until you finally snap and get the STEVENWOOD tattoo on your forehead.

I feel responsible for this monster I have created. Had I not shared Stevens-Wood with you. You wouldn't be stewing over all this brouhaha.

Forgive me but I must remain anonymous

Way to go Jerry, another life that you ruined.

Yeah way ta go Jerry. Thanks for the Christmas gift of HATE!

Damn I cant beleive you got tazered!

Are you serious? Because if you are you would be the second person who believed I got zapped.
Wow do I really seem that crazy?

How could you even mention Steven and the Kids of Widney in the same post! Steven can only DREAM of ever having their talent or super cool car. They're hella lot cuter and more with it.