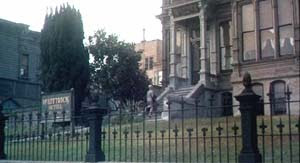 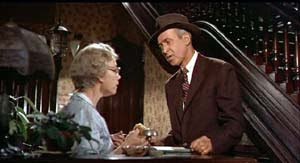 Viewers and critics concerned with narrative logic of VERTIGO focus on the McKittrick Hotel scene, where Madelyn apparently enters the hotel without being seen by the desk clerk and then vanishes without being seen by the clerk or Scottie.
Was the hotel clerk part of Elster's plot? Did Madelyn sneak out by a back stairway? More likely, this scene introduces an irreducible "uncanny" element to Madelyn. From another perspective, the hotel scene is an example of Hitchcock's "icebox factor": an anomaly that, assuming the director has done his job well, won't be noticed by the audience until the movie is over and they're discussing it in the kitchen. 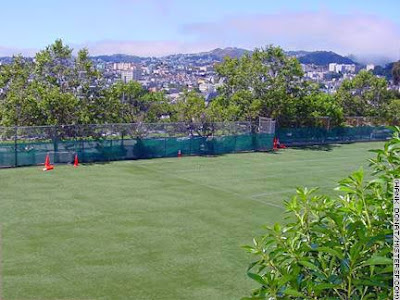 Oh, Gavin, I know you're behind all the plot twists in that flick. I've been vaguely aware that it has since become this field at Gough and Eddy. I'm sure you know the "Footsteps in the Fog" book that is a fun almost frame by frame guide to the locations in this other Hitchcock flicks. Alas, my street made it into "The Pursuit of Happyness" but not "Vertigo". But if you look at the former, you can actually seem my place for about 10 seconds. I received $400 for my place being an extra, my only major movie credit...to date.

Footsteps in the fog is a great book but it doesn't compare to being there. As an occasional visitor to that great city to the north I can understand the the city Hitchcock fell in love with. Most of the cosmo chic is still intact as it was in the 50's. Perhaps I'm projecting too much on the city. Perhaps its real. Who knows?

I hate to admit it, but Jimmy Stewart voice always did kind of get on my nerves.

I feel the same way about Tom Hanks. I cant stand his voice.

Saw a restored print in the big screen last night, and my beau and I were indeed discussing this scene on the bus ride home. I thought there were a few plausible explanations, including that "Carlotta" told the hotel manager that a creepy guy was following her and to play dumb about her presence at the hotel. Or, with all the money at stake, they could have paid her off. Or she had her own key and staged the "window show" and then immediately left, yes, by the back stairs. I had seen the movie before and so I was thinking of possible explanations as the scene went along. My beau had not seen the movie and didn't notice the fact that this scene is not explained.