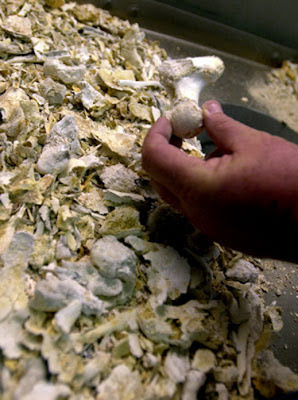 Everyone who rides Disneyland's popular "Pirates of the Caribbean" attraction knows "dead men tell no tales," and its animatronic figures aren't talking either. But, oh, if they could.

On Friday, workers at the Anaheim theme park spotted a guest on the ride sprinkling an unidentified substance into the water, prompting them to close the attraction and alert police.

"A witness described the substance as a baby powder that quickly dissipated," Disneyland resort spokesman Rob Doughty said. "We reopened the attraction after determining that there was no hazard to our guests."

Anaheim police decided not to take a report because they lacked a good description of the female suspect and the evidence was dumped into the water, Sgt. Rick Martinez said.

But within hours of Friday's incident, online columnists and bloggers who track news at the park said they began receiving e-mails from Disney employees claiming the episode was a case of the surreptitious scattering of human ashes.

Al Lutz, who runs miceage.com and first posted reports of the incident Tuesday, said several e-mails indicated that this was a recurring problem at the park.

Disney officials said they were unaware of any confirmed ash-scattering incidents in the park, and they didn't believe it to be a problem. From time to time, guests do ask permission to disperse ashes on park premises. The answer, Doughty said, is always no.

Without written permission, it's a misdemeanor violation of the state Health and Safety Code to scatter human ashes on private property, although there's little that authorities can do to enforce the law. Officials say the ashes pose no health threat.

Increasingly, though, inspectors with the Cemetery and Funeral Bureau of the state Department of Consumer Affairs are fielding calls from golf courses and other spots reporting people spreading ashes without permission.

"If these were rogue funeral directors out there tossing remains out of rides, we would take a very dim view of this," bureau spokesman Kevin Flanagan said. "I don't think it's any secret to anybody that people will scatter ashes where people can get away with it. But how are you going to enforce something like that?"

In "Mouse Tales: A Behind-the-Ears Look at Disneyland," author David Koenig said the park's Haunted Mansion had been the site of at least one previous ash-scattering.

Koenig's book quoted an employee, whom he did not identify, who recounted the case of a small group of visitors who arrived at the Haunted Mansion on a Saturday night in December 2002. The group requested a little extra time for a quick memorial service for a 7-year-old boy who had died, the employee said, according to Koenig.

But later, ride operators spotted one of the guests throwing a powdery substance off her "Doom Buggy."

After the ride was shut down, the employee discovered "a smattering of dust, 'gray, like ash,' " Koenig wrote.

They never did catch the anthrax attack perpetrator/s back in 2001 now did they?

What an ash-hole! I wonder if they were annual pash-holders!

You mean PASSHOLES?
It's just the sorta thing they'd do.

WAT...
Exactly! No one expects the grieving Butterhorn.