For years I have had two photo albums that I picked up while visiting L.A.'s Chinatown. While I was few years too late to see Faye Dunaway toss a glass of her own urine into Roman Polanski's face I was right on time when it came to buying these albums. (Notice how I tied a little known fact about the filming of CHINATOWN with my picking up useless crap IN Chinatown. Neeto huh?)

So these little albums have been lurking around for a while. 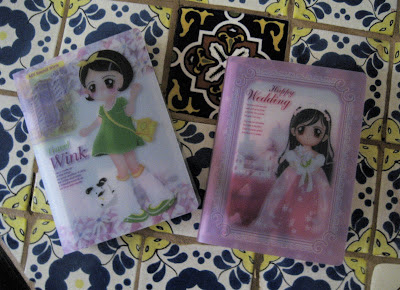 They looked cute. One is a travel photo album the other is a wedding photo album. Nothing odd in that.

It is the little poems on the covers that are too much.

Lets take a look at the travel album.
First off its called TRAVEL WINK. Now is the girl on the cover called Wink or is it TRAVEL "WINK"? You know... Like you say you are traveling but really you are in prison for armed robbery and assault with intent to kill and you had a minor as an accomplice.
Or is it Travel (Word that isn't even close to the meaning they wanted to convey) 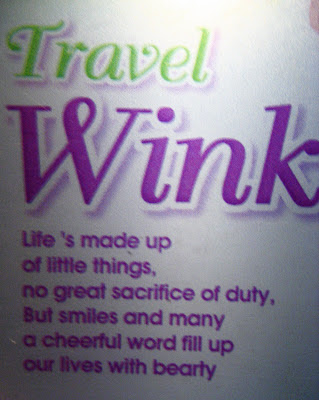 Now lets get to the meat of things baby!
In the event you cannot see the image above I will now use my toddler typing skills so you can enjoy this little poem:

Travel
Wink
Life 's made up
of little things,
no great sacrifice of duty,
But smiles and many
a cheerful word fill up
our lives with bearty.

Touching isn't it. My life's filled with BEARty.

The other Album is equally if not more confusing. While the Album does say HAPPY WEDDING the poem seems more fitting for Sen. Larry Craigs wife. 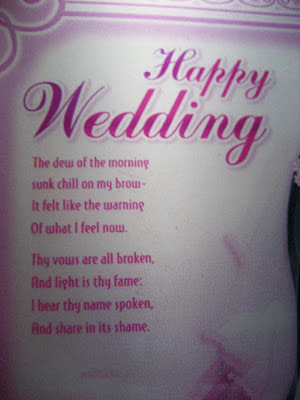 The dew of the morning
sunk chill on my brow-
It felt like the warning
Of what I feel now.

Thy vows are all broken,
And light is thy fame:
I hear thy name spoken,
And share in its shame.


Now that is a happy wedding indeed!
Posted by Gavin Elster at 9:00 AM

The top poem, as far as I can tell is "Life is Made Up of Little Things" and is by Mary. R. Hartman (a Louise Lasser pen name, perhaps?).

The second is WHen We Two Parted by Lord Byron.

These "bits o' poems" are so wrong for these albums.

Wink's on crack. Wink's been left standing at the altar. Wink stinks when it comes to choosing poetry. Egads!