...paddywhack. Give the dog a bone.

I think Ricardo's "what?" is very sincere in this next clip.

(A side note: Ricardo is an amazing actor. A nasty polo accident left him with a rather serious limp. He is actually acting the limp away and doing a very good job at it. )


On September 3rd 1993, Herve, accompanied by his significant other Katherine Self, would attend a screening of The Fugitive at the Directors Guild Theater in Hollywood. They would later enjoy a dinner at a restaurant near their North Hollywood home at 11537 Killion Drive.

In the early morning hours of September 4th 1993 his common-law wife would find his body. It seems Herve had written a suicide note, grabbed his tape recorder and proceeded to his cluttered backyard. He turned on the tape recorder and spoke into the microphone, "Kathy, I can't live like this anymore. I've always been a proud man and always wanted to make you proud of me. You know you made me feel like a giant and that's how I want you to remember me" After a bit more rambling he said "I'm doing what I have to do...I want everything to go to Kathy...I want everyone to know that I love them."

In a sitting position, Herve leaned back, placed a pillow against his chest, and fired the pistol into the pillow. The bullet would travel through Herve's chest. The tape recorder caught the sound of Herve cocking the pistol just before the deadly shots rang out. As he lay slumped against the glass door he mumbled, "it hurts, it hurts...Im dying, I'm dying."

Kathy immediately rushed Herve to the Medical Center of North Hollywood. At 3:40 in the afternoon, Herve Villechaize was declared deceased by the attending doctors.

He also wrote a note. 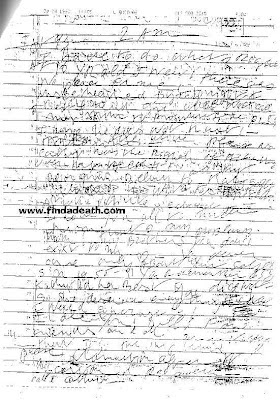 What it seems to say is:

I have to do what's right. At 6 years old I knew there was no place for me. Who believed my (illegible) best friend girl will not call my mom to answer the Q's. I hope she does not hurt. I'm still alive. Please know Kathy has the right of attorney over my health and my belongings belong to Kathy Self including the right to a script and movie and writings, etc. I love you all too much, it's one of just of my problems. Mom! My brothers you didn't exhist to my heart you never care only about yourselves since 1955, you remember??? Kathy did her best, you didn't so she deserves everything.

Go here to listen to his hit EMI release

I'm glad you've found a new obsession. Herve is a lot cuter and nicer than that hideous Stephen the gay realtor (see, I can't even remember his name).