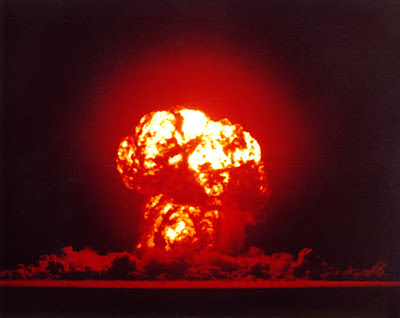 Each Wednesday I'll focus on a nuclear test. Today's test is the Apple II shot.

Yep. This is the one test that was used as a plot device in Indiana Jones and the Kingdom of the Crystal Skull.
For this blast the FCDA constructed a typical American community, complete with two double story and three single story houses, an electrical transformer station, a radio station, a propane tank filling station*, a weigh station and other small buildings. The houses were furnished with clothed mannequins placed inside. Several American-made cars and trailer homes, also with the consumer accurate mannequins, were positioned at various distances and angles from ground zero to measure the effects of the nuclear test.

The houses were constructed of different building materials with varied exteriors and were heavily instrumented to measure the blast and over pressures from the nuclear detonation. Finally, canned food products were placed in the homes and outside in the trenches. The day before the test, frozen food was flown in from Chicago and placed in the kitchens.

To this day Apple II homes still stand in the Nevada desert and are a highpoint of the public tours that explore the Nevada Test Site. 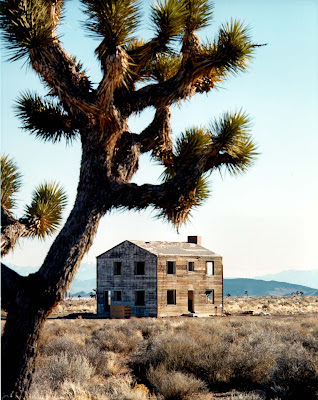 The two-story homes were subjected to a pressure of about 1.7 pounds per square inch during the blast.

To get an idea on how many people were there during the test, how close and what they were doing, please feel free to read this sanitized report.


*I'm pretty sure they did this just because it could make for a damn cool explosion.
Posted by Gavin Elster at 8:26 AM

What a lovely reality! NUKES! I LOVE NUKE TESTS! Something so beautifully disturbing and pathetic about man's ability to destroy an entire city and vaporize and kill thousands! OH THE HUMANITY! I wonder if in our lifetimes we will be witness to one of these actually going off in a major city. EEK! Such a purty mushroom cloud.

Great nuclear test scene in the new INDY movie by the way. LOVED IT, even if the film itself was only so so.