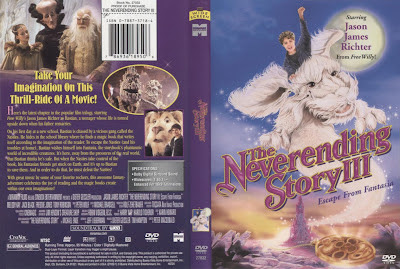 There was a part three doncha know. This one starred Jack Black. 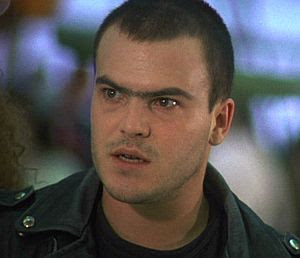 Here is a little wiki on it:

Bastian Balthazar Bux has begun a new chapter in his life. His father has married again, to a woman named Jane, whose daughter Nicole is displeased by having a new family. Bastian also starts term in high school, where he becomes victim to the Nasties, a quintet of five bullies led by Slip (Jack Black). He manages to get them expelled by the janitor after the Nasties trap him in the boiler room. He flees to the library where he is surprised to find Mr. Koreander and the Neverending Story. The Nasties locate him, but he escapes through the book to Fantasia.

Bastian arrives in Fantasia, where he is reunited old friends Falkor and the gnomes Engywook and Urgl. However, the Nasties find the Neverending Story and use their cruelty to bombard the land with fireballs and a storm. Meeting a walking tree gnome, Barkis, Bastian and the group of his friends head for the Wandering Mountains to speak with the Childlike Empress. She asks Bastian to find the Neverending Story with the Auryn. Falkor, Barkis, the gnomes and the Rockbiter's son, Junior, help him; a "wish overload" causes the group to scatter across Earth. Barkis ends up in a forest somewhere; Falkor saves Junior from falling to his death near Mount Rushmore; and the gnomes end up ironically in Nome, Alaska. Bastian locates Falkor and Junior. Falkor flies off to find the others while Junior stays at Bastian's house. Rockbiter sadly informs his wife that Junior is gone and the effects of the Nasties cause them to fall out.

Nicole takes the Auryn from Bastian's room, discovers its wishing abilities, and takes it for a shopping trip to the local mall. Barkis arrives at Bastian's house disguised as a tree, while the Gnomes are mailed in a box. The reunited group go to the mall to find Nicole so they can get the Auryn back. Unfortunately, the Nasties gain it first, whereupon giant crusteacean creatures appear in Fantasia to kill the Empress and her advisors. Everyone in the mall begins to turn to evil, including Mr. Koreander and Bastian's parents. Nicole runs away in sadness and reveals to Bastian outside that her father was abusive and eventually divorced Jane. Bastian is struck by lightning, and begins to succumb to the cruel effects of the Nasties, but Nicole saves him. The two rush back to the mall where all the Fantasians are being held captive by the Nasties. Bastian manages to retrieve both the Auryn and the book and defeats the Nasties with a range of fighting moves. The Fantasians are sent back to Fantasia, which is restored to its former magnifience. Bastian and Nicole manage to keep their parents from divorcing, while Junior is reunited with his parents. Nicole and Bastian return to school the next day and find Bastian turned the Nasties into friendly school students. Bastian returns the Neverending Story to Mr. Koreander, who tells him that the story is not over yet.


Oh and includes the worst cover of BORN TO BE WILD ever.