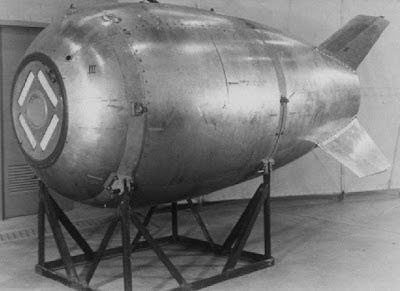 The Baker-2 was a test of the reproducibility of weapons performance and was identical to the Baker-1 device. It was detonated at 5:49 on February 2, 1951 over Frenchman Flat. 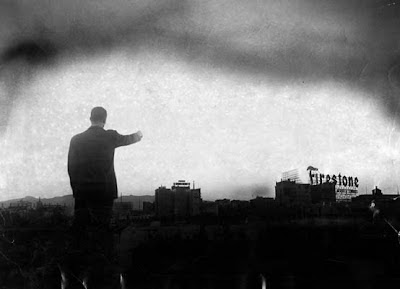 The atomic explosion, the largest yet set off on the Nevada test range, was clearly visible in Los Angeles. Staff photographer Perry Folwer was ready with his camera on a tripod on the roof of the Herald-Express building when the blast occurred at 5:49 a.m. Reporter Jack Smith, points towards the great white flash that clearly silhouetted mountains to the east. The brilliant spectacle was seen by many early-rising residents of Los Angeles. Photo dated: February 2, 1951.

Excerpt from the Cleburne Alabama News 3-31-05:
On the morning of Feb. 2, 1951, almost 2,000 miles from Heflin, an explosion occurred which affected everyone living in Cleburne County.
Now, some 54 years later we are beginning to learn about those explosions and that the spectacular sunsets of the 1950s and later were due, in part, to radioactive clouds continuing to float in the atmosphere following nuclear bomb tests in Nevada.
The Feb. 2 test, Baker-2 of the Ranger series, sent a radioactive cloud just south of Cleburne County. 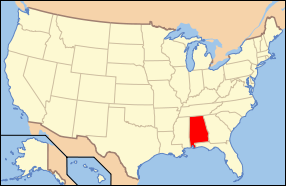 The medical effects of this fallout did not become public until the late 1990s after a study by the National Cancer Instutite was made public.
The NCI had sat on the information for four years and apparently had no intentions of releasing it to the public had it not been for a story by USA TODAY.
Several websites now address this national and international situation with one (www.downwinders.org) noting the federal government, “had knowingly exposed American citizens to radioactive fallout in every single county of the nation.” and that,“the actual fallout levels across the country were a hundred times higer than the government had ever admitted to.”
In Cleburne and thousands of other counties across the nation, radioactive Iodine-131 fell to the ground and now is believed to have contributed to increases in thyroid and other types of cancers.
Strontium 90, an isotope known as a “bone seeker”, was among the fallout and could be absorbed in the teeth and bones.
Posted by Gavin Elster at 12:00 AM

DAMN! To be seen from L.A. I mean, can you imagine the power of the nukes available now? Humans have created a truly horrific weapon.