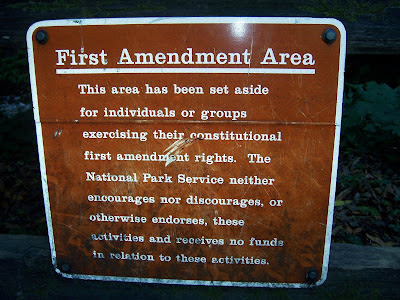 When Bush travels around the United States, the Secret Service visits the location ahead of time and orders local police to set up “free speech zones” or “protest zones” where people opposed to Bush policies (and sometimes sign-carrying supporters) are quarantined. These zones routinely succeed in keeping protesters out of presidential sight and outside the view of media covering the event.

When Bush came to the Pittsburgh area on Labor Day 2002, 65-year-old retired steel worker Bill Neel was there to greet him with a sign proclaiming, “The Bush family must surely love the poor, they made so many of us.” The local police, at the Secret Service’s behest, set up a “designated free-speech zone” on a baseball field surrounded by a chain-link fence a third of a mile from the location of Bush’s speech. The police cleared the path of the motorcade of all critical signs, though folks with pro-Bush signs were permitted to line the president’s path. Neel refused to go to the designated area and was arrested for disorderly conduct; the police also confiscated his sign. Neel later commented, “As far as I’m concerned, the whole country is a free speech zone. If the Bush administration has its way, anyone who criticizes them will be out of sight and out of mind."

It looks like they also have designated a permanent one in the Muir Woods. So, in theory, Bush could request any protesters in the country do so in this concentrated protest camp? I agree with this poor Pittsburgh guy. The whole country is a free speech area. This practice of oppression, media manipulation and ego boosting for our emotionally handicapped "leader" needs to stop. The idea is repulsive. The fact we lay down and take it is even more repulsive.
So you are allowed a little bitch space in the woods. Great.
If you want to get to this space be prepared to bring cash and little else.
Lets see what it takes to be holed up in this pen.

Ah the park fee:
Muir Woods National Monument
• Individuals 17 years of age and older: $3.00 per day.
• Local Passport is good for 12 months and admits pass holder and all accompanying
passengers in a private vehicle for an annual fee of $15.00.


The Muir woods does not permit the following unless a permit is granted:
• Restricted Use Permit (Tour Bus)
• Beach Fires
• Picnic Groups over 50 persons
• Woodcutting
• Camping in designated sites
• Operating power saws, portable engines
• Operating a public address system
• Alcoholic beverage sales
• Using or possessing explosives or fireworks
• Conducting research or collecting specimens
• Entry into a closed area
• Conducting a special event
• Public assemblies, meetings
• Selling or distributing printed matter
• Residing on Federal lands
• Memorialization – (Scattering ashes)
• Vessels
• Commercial and private operations:
• Advertisements
• Business operations
• Commercial photography (motion or still)
Except small operations with less than three
People, without the use of models, props or products
• Commercial vehicles (Any vehicle used for the
Transportation of moveable property for a fee
or profit, or in connection with any business)
• Construction of a building, utility, etc.

So if your first amendment rights need to be augmented by any of the above be prepared to shell out for a permit and or be denied.

Picnicking is allowed except in the following designated areas:
• Muir Woods National Monument

• (a)(1) The following structures and/or areas are closed to the possession of pets:
• Muir Woods National Monument

• Pursuant to 2.21(a) smoking is prohibited on or at:
• Muir Woods National Monument


(a)(1) The following areas are closed to all swimming and bathing:
• All waters within Muir Woods National Monument


So lets see...
If you want to use the freedom of speech area you need to pay a fee to enter it. Pay yet another fee to pass out fliers. Pay more fees if you want people to hear what you are saying in the middle of the woods.Pay more fees since it is a special event.
Pay a public Assembly , meeting fee. If you attract more than 50 people that's another fee.
You cannot eat, smoke, booze it up, or take your pets within the area.Oh and you stink.

Thanks for this Free speech area.
I'll stick to the blog. (until blogger deems me inappropriate)
Posted by Gavin Elster at 10:05 AM

Don't I have a constitutional right to get drunk and express myself in National Parks for free?

This is awesome. May I forward?

There is no Free Speech. America makes you believe you have all these amazing rights, but it's a farce, a lie.

have you seen the free speech area at valley college?

Wait till Obama gets elected President. When any opposing views, or negative commentary to him or his policies will immediately get squashed under the cries of racism!!
We're going to look back at Bush's free speech restrictions with teary eyed nostalgia

Anonymous,
I know who you are. Just keep talkin'.

Beware of Muir Woods free speech Scammers. There are people whom sit in that parking spot all day, and take in donations. 99% of them are scammers.