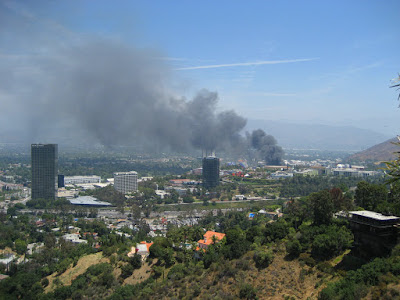 Universal Studios the most flammable studio in the U.S. caught fire this morning. Once again the main back lot burned. This time New York Street and New England streets went up in flames... again. Unfortunately Courthouse Square was also destroyed. and the most tragic news is the destruction of a film and tape vault housing over 40,000 elements. 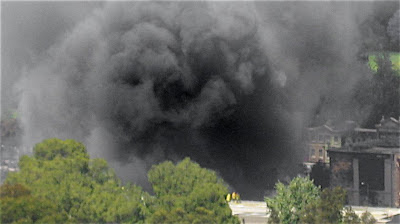 The smell is not like a brushfire but more acidic with a plastic/electrical leaded smell.

New York and New England streets were rebuilt after a devastating fire in November of 1990 when a security guard set off a nasty blaze that consumed most of the historic sets. That was during the filming of the Stallone film "Oscar." The rebuilt, sets were supposed to be less prone to fire but... oh well. Sadly the public never knows about the replacement of sets as the tour has a nasty habit of lying to the patrons. I guess it is less thrilling to hear "...and this is an exact replica of the now destroyed set from "The Sting."
Give it a year and it will be as if it never happened.
Universal rewriting their own history for your benefit.


The fire this morning also took the "King Kong" attraction.

That attraction was in need of being demo'd anyway. The attraction was installed not for the remake of "King Kong" with Jessica Lange but its lesser known sequel with Linda Hamilton and her bare breasts. "King Kong Lives" Yep it was a real movie. King Kong survived the fall from the twin towers and needs a heart transplant to live plus a blood transfusion. Where to get the blood? Well... Try LADY KONG! Yep Lady Kong and King escape capture ( right after his open heart surgery) and go into the mountains of New Jersey. The movie failed even before it was released. But Universal thinks they shit gold every time a turd like this is made and built this fine attraction just in time for the movie to fail. Way to go UNI! So no more reminder that there once was a film called KING KONG LIVES and no more banana breath. 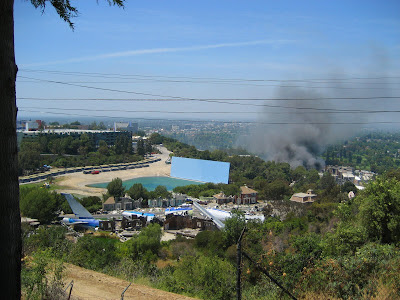 Lets look at the history of fire on the back lot.

May 15 1967
This devastating fire destroyed the Little Europe area (including the Court of Miracles). Part of Spartacus Square was spared, only to be destroyed 20 years later.
"Wind-whipped flames chew their way through movie and TV sets on Universal Studios' back lot, causing an estimated $1 million damage. A studio spokesman reported the fire, which sent flames 200 to 300 feet into the air, started near the "The Virginian" set then spread to the "Run For Your Life" filming area."

Friday September 4 1987
Flames erupted on the back lot "Spartacus" set at Universal Studios in Universal City on Friday night, destroying the three-story structure as well as three adjacent buildings before being knocked down by Los Angeles County and City firefighters.
County fire officers said a bomb threat was telephoned to a nearby set, Studio 44, which was being evacuated at the time the fire broke out in "Spartacus Square", where the 1960 Kirk Douglas movie was filmed.
The "Spartacus" set was not in use, however, and there were no injuries.
"We're trying to determine if the two things (the threat and the fire) are connected," Assistant County Fire Chief Ray Shackelford said soon after the flames were beaten down.
Four buildings were damaged in addition to the four that were destroyed. Shackelford estimated damage at $2.5 million, including structures and equipment.
Studio official Bill Decinces suggested the loss was actually much higher because the figures were based on values 10 years ago. "Any time you have a fire of this size," he said, "it is a major loss."
The fire erupted about 7:40p.m. on the 60- by 200-foot set in the center of the studio's old European Village section. It was reported contained a half hour later.
Arson investigators were dispatched quickly. "We are trying to figure out whether there was or was not a bomb," said Sheriff's Sgt. John Andrews.
County firefighter Mark Wilson reported there apparently had been the threat of a second bomb or fire later in the evening.
County Fire Department Battallion Chief Gordon Pearson said the bomb reports may have started with the sound of "popping cans... part of the set." He added, "We won't be able to tell until we get into it."
Studio spokeswoman Joan Bullard said she talked to a high studio official "and he didn't say anything about a bomb."
Studio security supervisor Nicholas de Luca said he was on patrol at the far side of the studio property when "I heard popping sounds. I drove this way. It was already fully involved."
At their height, flames were shooting hundreds of feet into the air, causing problems on the nearby Hollywood Freeway as motorists slowed to gaze.
The fire, however, was some distance from the Universal Amphitheater and cinemas, where evening shows went ahead without interruption.
As heavy layers of smoke covered the area, people working on film projects in other buildings were evacuated hastily.


November 6 1990
A massive fire started deliberately on the backlot destroyed a fifth of the standing sets. The total damage was estimated at up to $50 million, and was started in a Brownstone Street alley by a security guard with a cigarette lighter. The flames were fuelled by gale-force winds and took hours to get under control.
It was described as one of the largest fires in Los Angeles history and took 400 firefighters from 86 companies in the LA and Burbank areas along with 6 helicopters to get it under control.
Sets that were damaged or destroyed included:
- New York Street (recently seen in Dick Tracy - destroyed)
- Ben Hur set (destroyed)
- Courthouse Square (gutted, except the Courthouse). The sets as seen in Back to the Future 1 - 3 were rebuilt to different designs - only the Courthouse is original.
The security guard was hired to protect 21 period cars that were being used in the Sylvester Stallone film "Oscar", which were also destroyed in the fire, and was believed to be working for a private company called 'Burns Inc.'
He was sentenced to 4 years in prison in January 1992.
Rebuilding began on 26 November 1990 after designers came up with new designs to retain the original ambience, but incorporate changes to make the sets more useable to modern crews.
Steven Spielberg was involved in the design phase. The first production to shoot on the newly rebuilt New York sets was Disney's Newsies.

September 6 1997
This fire started in a chemical storage area adjacent to Courthouse Square, and was blamed on improperly stored chemicals rather than arson.
The northern side of Courthouse Square was destroyed, but the Courthouse itself was spared (again - see 1990 fire) apart from some charring. The sets that were destroyed were rebuilt immediately to the same designs.

Universal just loves to catch fire. Go figure. I'm sure the insurance will more than pay for the replacement of the structures and perhaps whatever money is left over can help with the building costs for the new multimillion dollar Conan O'Brien stage. ** I was on the lot for this one. I was working on CHILDS PLAY 3 and I recall smelling the fire as I was looking at Sylvester Stallone's bus parked outside our stage. It was parked between the back of the attraction and the CP3 set. I thought to myself then "Stallone set another fire" as the big fire happened during "Oscar" This little fire happened during "Stop! or my mom will Shoot!" The fire was small and happened before the attraction was open to the public. Stallone didn't start either fire but I still don't want to work anywhere around the man. Just to be safe.
Posted by Gavin Elster at 8:33 AM

I can smell the fire from our house.

I wouldn't work with Stallone cause his mom totally creeps me out, and you know she'd be hanging around the set trying to give readings...

I had no idea this place was so fire happy!

I will miss Kong. I really will. I liked that attraction a lot actually.